Gut Check loves us some wine. We want a bottle with bang and a bang for our buck, so every week we will visit a local wine shop, where the experts will recommend a good-value wine priced under $15. We'll drink some and tell you wether we want to continue -- because the only time Gut Check has our nose in the air is while we're draining our glass. 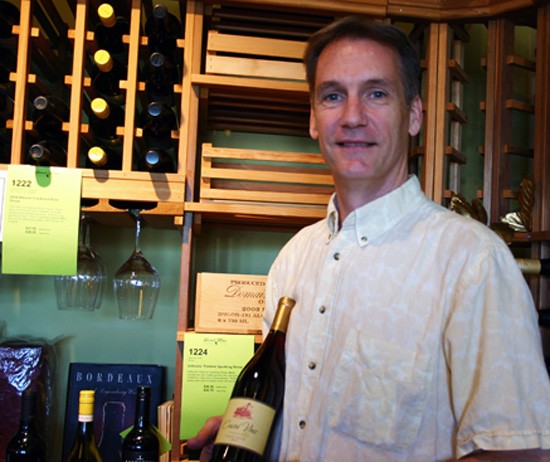 "My wife Julie and I wanted to control our own destinies," says co-proprietor Dan Garland, veteran of a 25-year career in sales and marketing, a job that brought with it significant travel demands. "We didn't want to look back on our lives and see we never tried to do something different." In 2006 the couple purchased Madinger Wines, a Kirkwood wine shop that specialized in German wines and had been in business here since 1986 (though the Madinger family's German winemaking connections go back to 1538).

The Garlands changed the name, and they relocated the store to Webster Groves in 2009, but they've maintained important elements of the Madinger business: an affection for German wines, unique wine dinners and events, and merchandise exclusivity.

The Garlands say none of their 300 selections can be found elsewhere in St. Louis, and in some cases not even elsewhere in the country. "As far as I know, we are the only sellers of Luxembourg wines," Dan Garland says. "We sell to the consulate in San Francisco and a huge Luxembourg heritage event in Wisconsin."

The bottle he shared with us is more widely available -- in restaurants. Though we couldn't track it down at any local establishments (seriously, where the hell is Google Wine Lists?). Garland asks $13.50 a bottle -- or $12 per if you buy a case.

A typical bottle of pinot noir, Garland tells us, runs $35 to $50. "It's a very sensitive grape with thin skin that doesn't like the heat." In other words, the famed grape of Burgundy, favorite of and analogy for Paul Giamatti's character in Sideways, requires a lot of TLC or it gets cranky. Got it.

We also like this nugget about what makes pinot different, from one of Garland's favorite winemakers, John Hawley: "If you're walking through the vines and pick a merlot grape, for example, it will taste pretty much like merlot the wine. The pinot grape, on the other hand, tastes nothing like the wine, and it tastes bad."

The point is, the quality of a pinot noir comes down to the winemaker. Says Garland: "They have to really coax the fruit out of it, which is very difficult."

The Garlands' search for a decent and reasonably priced pinot noir bore no (ahem) fruit until they stumbled across Coastal Vines, a California maker of "good, basic drinkers." (Sounds like Gut Check!)

What do the experts say about Coastal Vines Pinot Noir? Well, nothing, actually. Garland explains that critics like Robert Parker and Stephen Tanzer won't inhale deeply anywhere near a wine like Coastal Vines. That's because the winery is what Garland terms "a big crush house." Its pinot noir is a test-tube baby. It isn't even necessarily 100 percent pinot noir. By labeling it a "California pinot noir" rather than narrowing down the source of the grapes by region and/or vineyard, Coastal Vines is free to include up to 25 percent non-pinot grapes in the mix, and the winemaker doesn't have to specify what those grapes are.

OK, so it's cheap, and generic. Big deal, says Garland. "The price doesn't matter as long as people enjoy it."

So, do people enjoy it?

The shelf talkers extol this pinot's "beautiful rich plum robe" and "cherry notes and a touch of vanilla." Wine bloggers? Not so much. Tasters on www.gangofpour.com described the 2007 edition as "the epitome of industrial plonk," warning "DNPIM" -- Do Not Put In Mouth. A commenter at www.ratethegrapes.com crowned that same vintage the "Natty Lite of wines" and said it tasted like "a sweaty dog on a hot day."

Did that deter Gut Check? It did not. First off, the wine has not been made that Gut Check will refuse to taste. Second, it was nice to see other winos speaking our language. And finally, maybe 2007 was just a bad year.

And you know what? This stuff's not half bad! Garland's take: "dark ruby"; "smooth style"; "sweet cherry that's not overpowering to taste"; "hint of smoke"; "nicely balanced, which means good fruit up front and then you taste the tannin after." Half a minute after tasting, the acidity asserts itself on the sides of the tongue "with a pop of cherry that tingles."

Garland also says the wine "dries out right before you swallow and moves around my gums," which is where he lost us.

Right up until the mouth anatomy came in, though, Gut Check was following right along. We got how the wine changed as we drank it, how only the good flavors lingered afterward. Satisfied, we were preparing to go on our merry way and apply Garland's advice for sharpening our palate: "Throw away your books and ratings -- they don't mean anything. Just invest in a good corkscrew."

But then he asked us if we'd like to taste the difference between the crush-house plonk and the product of a veritable grape whisperer. That's when he pulled out an '08 John Hawley pinot from California's Russian River Valley, which Garland retails for $45 a bottle.

As much as we hate to admit it (because let's face it, how many $45 bottles are we gonna buy -- or even try for free, on this little adventure?), we finally got it. The Hawley exhibited itself in a similar sequence -- red fruit first, a finish with spice -- but drinking it was like adding a course to a meal, that course being the main course. It entirely changed the whole progression.

So this must be what they mean by "complexity"!

The $45 wine, made by one guy, with grapes chosen and hand-crushed in a 110-year-old basket, was richer, smoother, more satisfying. And we tasted...chocolate!

Gut Check's take: The Coastal Vines pinot noir is above all approachable, with a clear distinction between the tasting stages. Kind of like skipping the Shakespeare original and going straight to the CliffsNotes. "Here's fruit, now here're tannins, linger, the end!" Soft finish, enjoyable, but -- ain't nothing like the real thing. Also, Gut Check would be remiss if we didn't point out that even at the $12 case price, Google informs us it's not a great value.

Tonight from 5 to 8 p.m. (and tomorrow, Saturday, April 16, from noon till 5), Garland Wines will host a tasting of German white wines, a specialty of the shop.