Get Your Early-Morning Soccer Kicks Here 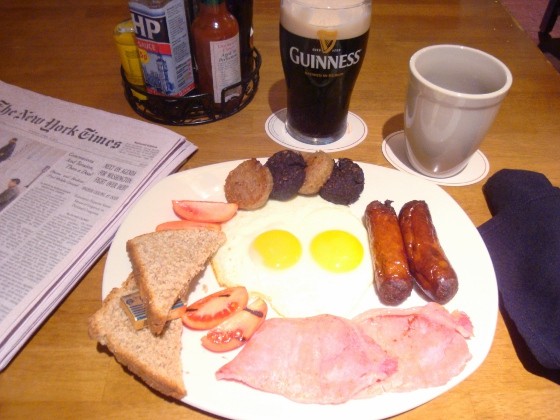 It's 6:30 a.m. on a recent Sunday morning inside Tigín Irish Pub on Washington Avenue -- the perfect time for a breakfast pint of Guinness.

OK, so it's not actually 6:30 a.m. -- it's more like 9:45 (some morning drinkers are bolder than others). But a few of the patrons here actually did stroll in before the sun rose this morning, just in time to catch the opening whistle of the Arsenal-Blackpool soccer match in England.

For all you other European soccer fans out there, Tigín is a place where you can come as early as 6:30 a.m. on weekends to catch live action of your favorite teams across the pond.

"The bar was established around the two greatest things in the world: European sports and the perfect point of Guinness," says J.D. Tillotson, the weekend manager of the restaurant, which is part of the Hampton Inn.

When Tigín was first established, management would open the doors at the break of dawn each Saturday and Sunday. They've since cut back a bit, reserving their earliest openings for bigger English Premier League contests -- especially those featuring Manchester United, Chelsea, Arsenal, Liverpool, Manchester City and Everton. (Check the restaurant's website for the schedule.)

But Tillotson assures soccer fans that they're more than welcome to come in as early as 6:30 a.m. on any Saturday or Sunday when their favorite team is playing; all you need to do is call the day before. (And the restaurant will always be open by 9 a.m., for the later games.)

The bar also prides itself on its Guinness. The kegs are shipped directly from Dublin, and none of it is older than 30 days. "It's the lifeblood of our company," says Tillotson.