Welcome to Girl Walks into a Bar, a weekly Gut Check feature that spotlights local bars and bartenders. This week Katie Moulton profiles Frank Papa's Ristorante's Tim Krampe. Below is a Q&A with Krampe, followed by the recipe for his Chocolate Martini.

Sometimes a drink is just a drink. And sometimes, a drink forever alters the course of entire lives. If anecdotal history is to be believed, Tim Krampe's Chocolate Martini is a life-changer.

This was the drink that Tim made with great attention and care when Girl Walks Into a Bar visited Frank Papa's Ristorante (2241 South Brentwood Boulevard; 314-961-3344) before service one evening, but more on that in a moment. Krampe started bartending 15 years ago at the Brentwood establishment, which toes the line between fine dining and a "where everybody knows your name" feel. Since this was his first restaurant job, this self-described introvert says he had to "learn by trial and error."

Though he used to bartend full-time, Tim now works weekend nights at Frank Papa's while pursuing his degree in civil engineering at University of Missouri-St. Louis. For now, he's still the genuine, friendly guy behind the bar, who claims to be shy but puts the drinker right at ease, the one who pours the drinks while you pour out your heart.

And like the classic bartender romantic, Tim told us a love story: He was working the bar one night when a young woman with an exotic accent came in to get food to go. The woman, Vanessa, was from Sao Paolo, Brazil, studying in St. Louis. While she waited, they talked and Tim made her a drink. Later, she told her host family, "I want to date him." What drink did Tim make? The Chocolate Martini, of course. In June, Tim and Vanessa will have been married for five years.

My bar is the only bar in St. Louis where... There are probably a lot of answers that Frank [Papa] wouldn't like me to print... [laughs] This is the only bar where you can have our famous chocolate martini and our flash-fried escarole.

Girl walks into a bar, orders a ____. She just earned my undying admiration. A Manhattan. [general agreement from bar staff] You don't hear it very often. The first time a girl ordered it from me was a 21-year-old and it stuck with me. To be that young and know what you want - pretty cool.

Most dumbass - or strange - drink anyone has ever asked for. Lavender martini. A couple gave me trouble for not having fresh lavender, but we haven't yet started stocking it. [laughs - makes GWIB think they're not about to]

Other than your own bar, where do you go to get a good drink? And what do you have? O'B Clark's. Cicero's after finals for their great beer selection. I'll have a 1554. Or just a Bud Light.

If my friends and I simply must have a round of shots, what should they be? I'm told I make a good lemon drop - you know, with sugar on the rim. Frank makes a great Purple Hooter. [GWIB has tried both - they are both excellent and deadly.] And we make our own limoncello.

What's the most exciting or memorable event you've witnessed while tending bar? Late one night, a man in pajama pants and a jacket came in with a guitar case. He seemed a little out of it, but he ordered a couple glasses of wine and told us about how he used to play guitar for one of those big '70s bands. Then it turned out he couldn't pay for his drinks, but he left his guitar at the bar as collateral that he would return to pay his check. It turned out the guitar really was a $20,000 Gibson! He did come back and pay and took the guitar with him - unfortunately.

Another time, several years ago, August Busch IV came in to have dinner. One of our older regulars was sitting at the bar, and at one point, he turns around and yells, "Wazzzzuuuuup!" to Busch and his friends.

No fights, but there have been a few after-hours arm-wrestling matches. I've also witnessed break-ups, which are very hard to watch.

Tell me one thing most people don't know about bartending. It's very mentally and emotionally taxing. Especially for me as an introvert, it can wear me out. You get to know people, and it can be a rollercoaster of emotion. It really hurts if a customer tells you their sad story.

Though he couldn't give me the exact recipe, but GWIB watched closely as Tim made "the drink that helped my wife fall in love with me." 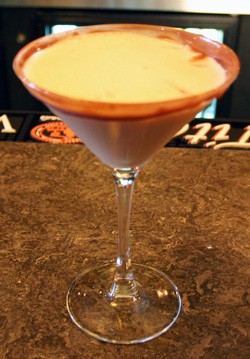 Gold Brick chocolate hardened on the rim of a martini glass

Combine in shaker, shake and pour.