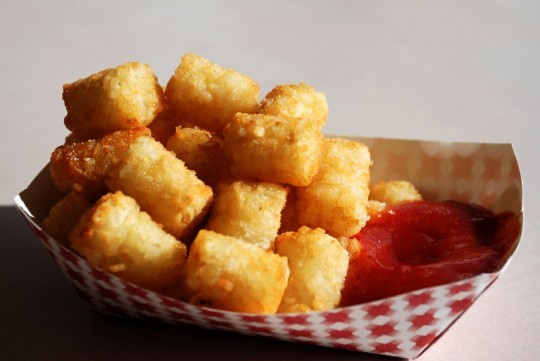 We've heard about all-you-can-eat hot-dog competitions. And all-you-can-eat pie contests. We were even aware, in some deep recess of our brain, that there's an International Federation of Competitive Eating to regulate some of the more, umm, prestigious competitive eating events.

But we'd never heard of a tater tot eating contest -- until we learned about the one at Bar Louie next week. Silly us! Turns out, this is the fourth year of hosting "Rock the Tot" for the Chicago-based chain, which has locations in both the Central West End and Kirkwood. The winner at each location gets a $250 gift card for Bar Louie, plus free tots for a year; the national winner gets a $500 gift card, plus a year's worth of free tots.

And for all you city dwellers, there's a big opportunity lurking at the Central West End location this year: "Carl" is retiring.

For the uninitiated who've never heard of "Carl," Sarah Newlon, sales/marketing manager of the CWE location, explains that he's bested all other Central West End competitors for three years running. (Two years ago, in fact, he won the national title, and last year he finished third in the nation.)

But last year, when Carl pounded down a staggering 4.5 pounds of these little spud puppies in the proscribed six-minute limit -- and still barely eeked out a local victory -- he announced his retirement. "He has a perfectionist's personality," Newlon explains. 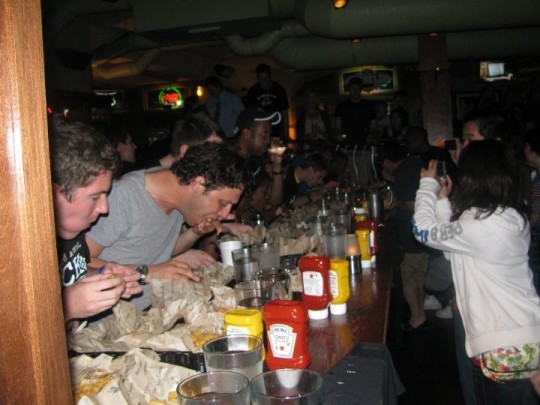 So. If you truly believe nature abhors a vacuum -- and you're ready to scarf down a virtual brick's worth of deep-fried potatoes in cylindrical form -- get thee to the Central West End Bar Louie at 7:30 p.m. April 21. (The competition starts at 8 p.m. that night; you also might want to pop by this week to register. While there's no fee, Newlon warns us that tot-eating berths are limited.)

Even if you're not into stuffing your face, you still might want to drop by next Thursday. The event is also wildly popular with spectators. "People get really excited about tater tots," Newlon says.