Quiznos' Chicken Bacon Dipper -- Like Nacho Sauce for Your Sammy 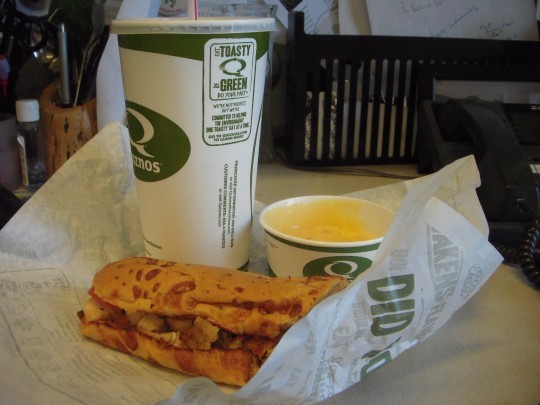 When it comes to fast food, we've got no problem with Quiznos. The Denver-based sandwich franchise rocks on a number of levels, from its crispy-on-the-edges toasted bread to its liberal use of non-fast-food flavors like parmesan and rosemary. We're also a sucker for the pepper bar -- unlike lesser sub shops (we're talking to you, Subway!), Quiznos doesn't make us beg a "sandwich artist" for pickles and jalapenos. We can just load up and pile 'em on.

But when it comes to Quiznos' new limited-time offering, the Chicken Bacon Dipper, we're going to have to agree to disagree. They've been trying to sell the dipper as a tasty chicken/bacon sandwich, plus a tantalizing chile/cheese sauce -- but the result struck us as a soggy nacho cheese sandwich, weighed down by bacon-related gratuity.

Really, our biggest takeaway after wolfing down one of these bad boys is this: When you're eating a sandwich on already moist chipotle-flavored bread, and that bread is slathered with chipotle mayo, the last thing you need is a vat of spicy chipotle cheese sauce to dunk it in. It's all too wet and too flavorful -- to the point that the flavors are literally canceling each other out. A heartier, simpler bread would have worked much better. Then again, so would skipping the dipping sauce!

Now, admittedly, part of the problem may have been that our Quiznos workers were not exactly on their game on the day we visited. Generally, we've found Quiznos' bread to be nicely crisp on the outside. Not so in this case; it was soggy even before we started dipping.

We've also, generally, been given a pretty big pile of meat at Quiznos. Not so here: Our chicken resembled less the generous pile of bird in Quiznos' ads and more a pathetic little assemblage. No wonder the bacon and mayo and sauce dominated so hopelessly: They had nothing to play off of.

For the record, it didn't help that the Chicken Bacon Dipper is (as the company's PR lady admits) one of the higher-calorie items on Quiznos' menu -- with 630 calories for our small sandwich and a "approximate" amount of dipping sauce, and as much as 1,250 calories for a large version.

Overall, the whole concept little bit disappointing. Not horrific, but not (at $5.19 for, again, a small sammy) something we'd order again. Next time we'll stick to the regular menu items -- and next time, instead of cheese sauce, we'll be content with that fabulous pepper bar. Sometimes, the simple pleasures really are the best.