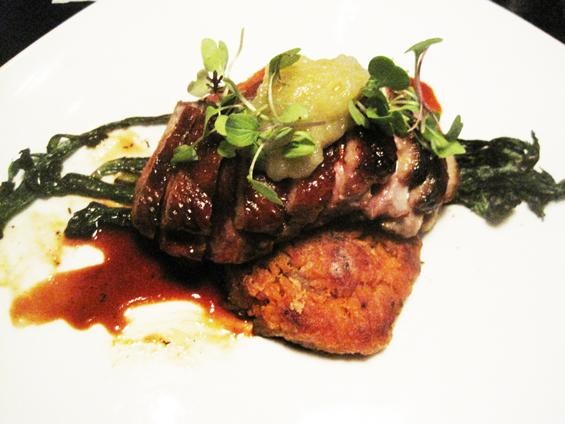 Sidney Street Café owner and executive chef Kevin Nashan was a semifinalist in the "Best Chef: Midwest" category of this year's James Beard Awards. About damn time. Nashan -- the reigning Riverfront Times "Best Local Chef" -- is as deserving of national notice as any St. Louis chef. His passion for food and those who grow, raise and prepare it shines through during even the briefest conversation with him -- and is made manifest at the restaurant that he has run for the better part of a decade, a place where a seat at the bar for a meal by yourself (as a certain restaurant critic might have done recently) can become a special occasion.

More so than at the other restaurants for which I've said this, I could claim any one of several different dishes on Sidney Street's menu as a favorite. For whatever reason -- honestly, I can't put a finger on why, exactly -- I always come back to the applewood-smoked duck.

The flavor is intensely smoky. Most barbecue doesn't achieve this level of smokiness. Yet even through this cloud of smoke the distinctive flavor of blush-red, medium-rare duck meat and the luscious texture of rendered duck fat come through.

Not enough duck for you? The duck breast sits atop a sweet-potato latke studded with duck confit. The latke, in turn, sits atop a small amount of charred rapini, its bitterness providing a welcome contrast to what could have been an overwhelmingly rich dish. From construction to preparation to the beautiful composition of the plate, it's simply a flat-out fantastic dish.