Saint Louis Bread Co. Offers Free Samples Today -- and the Opportunity to Give 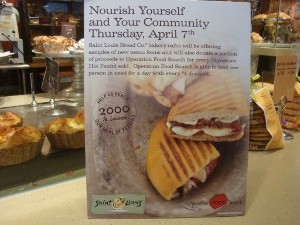 Stop by one of the 46 Saint Louis Bread Co. locations in the region today and there's a good chance you'll be approached by a sales associate and treated to a few samples of some of the chain's newest menu items, including steak panini and steak salad, as well as some of the more standard fare.

Operation Food Search is one of the St. Louis area's largest distributors of free food to the poor. (According to the organization's calculations, OFS helps to feed 130,000 people each month, nearly half of them children). Today's goal, says Bread Co. spokeswoman Kelli Nicholson, is to raise $8,000, which would feed about 2,000 hungry St. Louisans for one day.

"Today is a celebration that highlights our partnership with Operation Food Search, but also a call to action," Nicholson tells Gut Check. "It's our way of saying thanks for coming in, and 'Hey, we're also doing this great fundraiser.' "

This is the first time in two years the company has rolled out such a fundraiser, Nicholson adds.