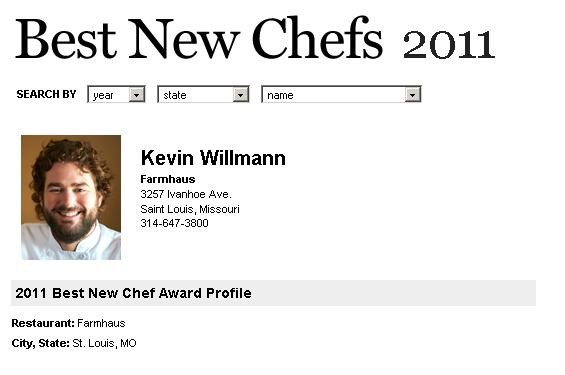 We bided our time -- by which we mean we sat on off-the-record confirmations that we couldn't reference for fear of having the béchamel sauce beaten out of us -- until Willmann confirmed the news Tuesday morning.

Then, yesterday afternoon, Food & Wine made it official, naming Willmann and the ten other Best New Chefs for 2011. A profile of and recipe from Willmann will appear in the magazine's July issue, which, if form holds, will have a group photo of the chefs on its cover.

In the opinion of this restaurant critic, who was wowed by Willmann's work at Erato on Main in Edwardsville, Illinois, as well as at Farmhaus -- 2010's nothing-else-was-even-close Best New Restaurant --  the honor is well deserved. Congrats to Willmann and the entire Farmhaus crew.