Fast-food chains became America's sixth food group by mass-producing cheap, gut-filling, handheld eats with indulgent, uncomplicated flavors the public could depend on. It's dietary crack, and it works every time.

Occasionally, though, fast-food and fast-casual chains mix it up by introducing new concepts and "special" dishes with limited runs. The results are often horrific -- remember the McLobster?

No? Exactly. We had blocked the memory too. Even when the item proves popular enough to be added to the regular menu, it still tends to stick out like the strange cousin who's the only one he doesn't know he was adopted...Oh, er, hey, KFC Double Down, we didn't see you there, y'know, amid all the other chicken fillets cross-dressing as sandwich buns.

Now, it's no secret Gut Check loves us some tacos. So when we heard that Taco Bell and Qdoba Mexican Grill were nearly simultaneously introducing new limited-time tacos with inexplicable concepts, we had to throw them in the Fight Club Sandwich ring... 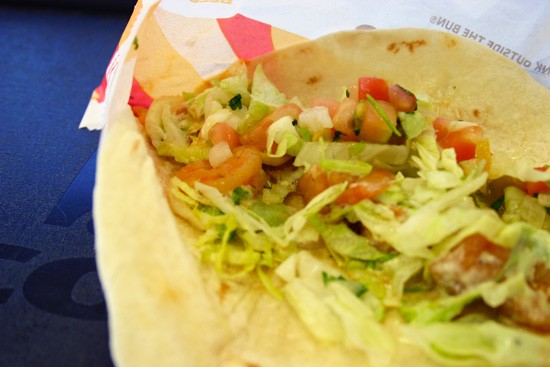 The Contenders Taco Bell has been promoting its Pacific Shrimp Tacos with spoof ads featuring a couple of characters called "Shrimpcrashers," who crash ritzy galas and music video shoots on opulent yachts to steal shrimp. The ads appeal to the Taco Bell demographic -- young adult males, or haven't you noticed? -- by recalling both Wedding Crashers and Lonely Island. Gut Check thinks sarcasm is the right tack, given that the big question here is whether customers will buy seafood from an alleged purveyor of "less than beef." Taco Bell was very careful to brand this "Pacific" shrimp as opposed to "Gulf of Mexico, Bubba Gump-style, possibly oil-drenched" shrimp.

For $2.79 plus tax, Gut Check purchased one soft-shell Pacific Shrimp Taco and did in fact locate the promised six shrimp within its floppy folds. The taco wasn't much to look at -- pale and falling open upon being unwrapped. But you know what? The Pacific Shrimp Taco is tasty! The iceberg lettuce is squishy and inconsequential (even though there's a lot of it), but the rest of the ingredients pull their weight. The shrimp, ostensibly seasoned in a chipotle marinade, are tiny, but you can't deny they're there. The mix of Fiesta Salsa and Avocado Ranch Dressing results in a pleasing, special-sauce flavor, with hints of cilantro, lime and chile.

All told, it's not bad. At 210 calories, it borderline qualifies as a "lighter" option. Still loaded with sodium, though. 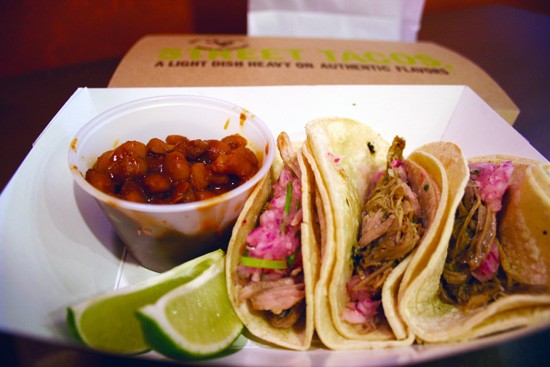 Next Gut Check visited Qdoba Mexican Grill for a taste of the new Mini Street Tacos. These are, no doubt, a direct ripoff of Taco Bell's "taqueria style" Cantina Tacos of yore -- yore in this case meaning "last year." Only Qdoba's are smaller, come three to an order and are wrapped in a double layer of corn tortillas (Taco Bell used flour tortillas).

For $4.99 before tax, we splurged for the combo: three tacos and a side of barbecue baked beans, along with a couple of lime wedges. Unlike the downmarket-Chipotle setup Qdoba lavishes on its other menu items, there's no customization of the street tacos other than your choice of pulled pork or shredded beef. We chose the slow-roasted pork version, which comes topped with a red onion and cilantro garnish.

The double-wrap tortillas are indeed "mini," but plunk down five bucks for this Qdoba combo and you've bought yourself a sufficiently filling snack. Note that we said "filling" -- as opposed to, say, "delicious." Or "tender, toothsome and tasty." The tortillas are stiff and flavorless. The pork is juicy, and the onion/cilantro garnish provides a shot of flavor that's well outside of Qdoba's wheelhouse. The lime juice doesn't hurt, either.

Then we dug into our side dish: the Ancho Chile BBQ Baked Beans.

Holy moly, Qdoba, stop trying to put Baby in a corner! Push those baked beans front-and-center! Sweet and spicy in a thick, rich-brown sauce, this side dish samba-ed all over our taste buds -- especially after it occurred to us to layer the beans into the tacos.

The Verdict: Gut Check can't help but wonder what would have transpired if the two chains had swapped the concepts. Would customers go for shrimp offered by Qdoba? And is Taco Bell more suited to channeling the charm of eating mystery meat from a street vendor?

As it is neither dish is a standout. But we'd order Qdoba's Mini Street Tacos again -- if only for those Ancho Chile BBQ Baked Beans.