Anthony Scarato of Anthonino's Taverna on the Hill, Part 2

This is part two of Katie Moulton's Chef's Choice profile of Anthony Scarato of Anthonino's Taverna. To read part one, click here. Part three, a recipe from Scarato, can be found here. 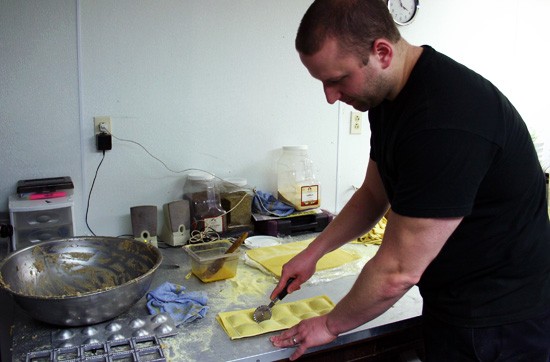 Did your family cook when you were a child? Yes, we come from a family of Italian and Greek heritage. So cooking and eating were a big part of our lives.

How old were you when you started cooking? I was nine, and my older brother Rosario was twelve.

First cooking job? We both worked for our father at his restaurant [Athens Cafe].

Did you attend culinary school or college? My brother and I both completed hospitality and culinary programs at St. Louis Community College-Forest Park. I went on to Saint Louis University to complete my B.A. in management and minor in restaurant management.

What do you eat? Anthony: I love to eat pasta, meats and vegetables. I also love our pizza because it's so different. I've yet to taste anyone's in St. Louis that's even close. I crave it all the time.

Rosario: I am a big meat eater.

What do you cook at home? I'm not home that often, but when I am we try and eat healthy. Stir-fry, grill, etc.

What are your three favorite restaurants in St. Louis (besides your own!)? Anthony: Pho Long, Protzel's Delicatessen, Woofie's. I have many other favorites; to list three is impossible.

​The local chef who most impresses you? Anthony: Anthony Devoti [of Five Bistro].

Favorite recent food find? Switching to buying our seafood either local or wild-caught!

Most essential ingredient in your kitchen? Anthony: Shallots.

Favorite local food find, and where do you get it? Troutdale Farm, a great local fish provider. Anthony Devoti suggested them to me. Also, Volpi products: sausage, salamis. They're the best in the country, if not the world. People don't realize how huge that company is -- been here for over 100 years.

One food you dislike? Sweetbreads.

A food you can't live without: Cheese.

An ingredient never allowed in your kitchen: I can't think of one. Only reason I wouldn't allow an ingredient would be due to price or if it harmed someone.

Culinarily speaking, St. Louis needs more... Late-night dinning, more of a change in people's minds to dine at all hours, not fast food.

Rosario: I don't hang out, I have two kids.

Favorite cookbooks? I don't have one. I constantly look online, watch TV and read to learn more ideas.

What's in your omelet? Cheddar and bacon.

What's your drink of choice? Seven and 7. I like scotch, but it gets me way too drunk.

What's the first rule for your kitchen staff? We're pretty relaxed, not a lot of rules. The staff has to have a high tolerance for heat, because the kitchen averages about 110 degrees and up from May to September. Pretty disgusting. Stay in school, kids! [Laughs] We have small lines, so there's a lot of bumping and rubbing -- you get pretty close.

What's the most difficult lesson you've learned in this business? The hours are tough, you miss out on a lot of little stuff. Also, you have to be here. You have to maintain order -- like a dam, it will eventually break.

What's the most exciting thing you've ever witnessed in your restaurant? A chick went into labor once. She ordered her meal and her water broke. We were like, "Get outta here!"

What's your proudest professional moment? Lately we've been receiving a lot of accolades around town: St. Louis Magazine featured our burgers and pizza, and the RFT "Best Greek Restaurant"in 2010.

What inspires you? Money and success.