South Central Regional Barista Competition: And the Winner Is... 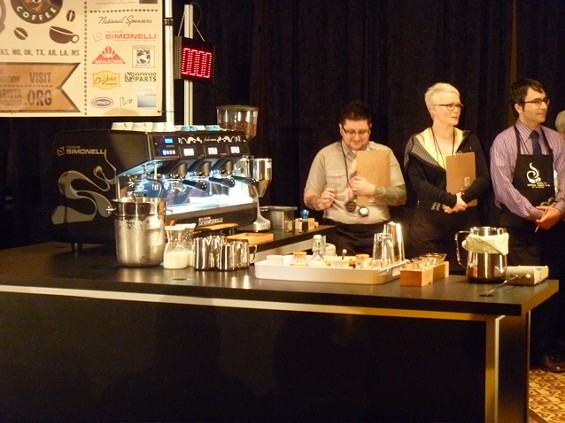 Several former baristas work here at Gut Check International Headquarters, and sometimes when we're really, really bored, we gather in someone's cubicle and compare war stories. Oddly enough, none of these stories has anything to do with the transcendent joy of pulling the perfect shot of espresso.

For one thing, most of us worked at Starbucks after the chain switched to the idiot-proof push-button espresso machines, which require no operating skill whatsoever. For another, it's much more fun to share stories of our most insane customers and compare the number of times the police had to stop by. When we wore the green apron, way more of our time was spent cleaning and dealing with crazy people than actually, y'know, practicing our craft.

The baristas who showed up at the South Central Regional Barista Competition at the Chase Park Plaza this weekend are in an entirely different league. These baristas grind and tamp their coffee grounds themselves. They have definite opinions about single-origin coffees and blends. They use phrases like "chocolatey finish" and "citrusy top notes" without irony. They know how to put pretty shapes into the foam of their cappuccinos. They eschew the coffee-stained apron in favor of dressing like nineteenth-century barkeeps. (Suspenders vs. vests is a major point of contention among serious baristas.) And, as befits those who have risen far enough in their field that they have reached the regional level of the United States Barista Championship, they don't have to clean up after themselves.

For Gut Check, it was a brave new world. 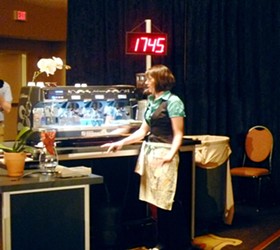 The competition officially started on Friday with practice sessions and the early rounds of the competition, but Gut Check waited for the finals on Sunday morning, by which time the initial field of eighteen competitors had been whittled to six. Among those six were three from the local chain Kaldi's: Joe Marrocco, a trainer; Nicole Call, manager of the De Mun location; and Steve Schuh, who toils in Columbia. (Kaldi's officially hosted the competition, but all the judges came from elsewhere, and since we didn't overhear any griping about a fix, we believe it was all above-board.)

We also felt we could claim a fourth finalist, Jacque (pronounced "Jackie") DesMarais, who hails from the Coffee Ethic in Springfield, Missouri. We had no claim on the remaining two, Jenna White and defending champion Lorenzo Perkins, who both come from behind the bar at Caffe Medici in Austin, Texas. We suppose if we were in the mood to treat this like a professional wrestling competition, we could have designated them the villains and booed vigorously whenever they appeared. But Gut Check made the fatal -- and ironic -- error of showing up to a barista competition uncaffeinated, and barista competitions are pretty civil anyway, so we just sat quietly in our chair.

This is the fourth year that St. Louis has hosted the regional barista competition, though the first year Missouri has been part of the South Central region. (Previously, we were in the Midwest region, which includes states mostly from the high plains.) "It's a mark of St. Louis's dedication to coffee culture," says Marrocco.

This was also the first year of the Brewers Cup, a competition for best brewed coffee. It was eventually won by Perkins, but Gut Check didn't observe the competition that closely. Chemex machines are just not that exciting to us, and besides, we needed a coffee break to sustain us through the three-hour barista competition.

Each barista has fifteen minutes to make and serve twelve drinks to the panel of four judges: one round of espresso shots, one round of cappuccinos and one round of a signature beverage. While they work, they rattle off a prepared monologue about the flavor profile of the coffee beans and their own personal philosophy of coffee drinking. (Sometimes this can verge on the pretentious, much like a server's description of the nightly special at a high-end restaurant.) Two more judges lurk in the background to observe the baristas' technical mastery of the espresso machine.

It's in the signature-drink portion where the baristas have their chance to shine -- and to prove that they actually have more in common with mixologists like Taste's Ted Kilgore than they do with the green-aproned masses. (Except that the use of alcohol is forbidden.) White actually used ingredients more commonly found in bars than coffeeshops: lavender water and lemon garnish. Schuh brought in a KitchenAid mixer and churned up a batch of ice cream. DesMarais used fruit syrup and butterscotch prepared over burners set up beside the espresso machine, then dipped the rims of the glasses in homemade marshmallow creme and toasted them with a miniature blowtorch to enhance the flavor. 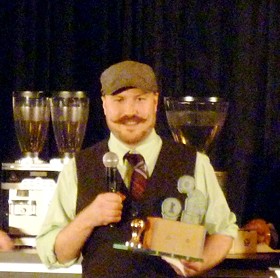 But the winner of the competition was Marrocco, whose entire presentation was a tribute to the east African nation of Burundi, home of the Kinyovu collective which grew the beans he used in the competition. In recent years, Burundi has been plagued by civil war and genocide and has the lowest per capita income of any country in the world. The farmers of the Kinyovu collective are subsistence farmers, who depend on Kaldi's and other buyers for their livelihood.

"For me," Marrocco told the judges, "coffee is more about the taste of a place, the taste of the people who grow it." (No, no, not literally. Burundi Kinyovu, he says, contains notes of mango, strawberry and grapefruit.)

Marrocco's signature drink involved a special cocktail that was supposed to represent the character of Burundi and its people: horseradish for the bitterness of civil war, mascarpone for the strength of the people, fresh-squeezed orange juice for the brightness of Burundi's future, a banana for the farmers who make up most of the population, mint for the freshness of the countryside and milk to bind it all together. The judges were instructed to alternate sips of the cocktail with sips from a shot of espresso which, Marrocco pointed out, is twice-fermented. (Most coffee is only fermented once.)

"It's the most delicious coffee I've ever had the pleasure of working with," he told Gut Check afterward when we asked how he chose his beans.

Marrocco's prize, in addition to a trophy, is a trip to the U.S. Barista Championship in Houston later this month.

Among those who gathered around Marrocco's station after he finished his presentation was Andrew Waley, who trained Marrocco in one of his first barista gigs and drove up from Cape Girardeau to see his former pupil. "The master has become the student," he declared emotionally. "My eyes teared up watching him."