Your typical Fight Club Sandwich throwdown pits one thingie against another thingie. You know: cupcakes. Hot dogs. Designer beer in cans. Trouble is, when you're talking dog treats -- and today we're talking dog treats -- you need to bear in mind that given the choice between two treats, a dog is going to eat both of them and not betray an obvious preference for either. So rather than stack up one treat against another treat, in this FCS bout we evaluate one kind of treat, consumed by several dogs. 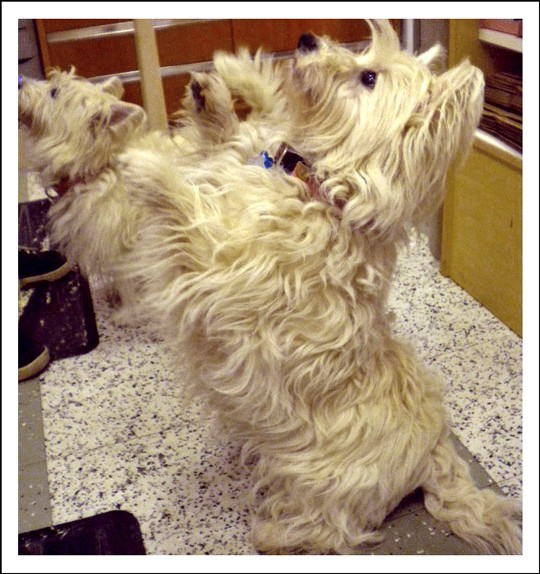 The Treat: House-baked treats from Wolfgang's Pet Stop (330 North Euclid Avenue; 314-367-8088). Iced cookies $1.25 apiece; $1 for non-iced. Other varieties of treats, from iced petits fours to peanut-butter biscuits and more, available for a range of prices.

Maggie: A formerly homeless dog of unknown ancestry and age; about a year and a half old (control).

The Results: Do dogs really need iced treats with colored-sugar sprinkles? Hell, Steuben -- whose pedigree goes back to the 17th-century, a representative of a breed that shows up in Renaissance paintings -- likes to snack on acorns and dried worms. Hardly any dog will turn up its nose at cat or horse poop.

Perhaps as a result of his breeding, however, Steuben has a delicate digestive mechanism. To put it less delicately: After eating wheat or corn he farts like an adolescent boy at a bean-eating contest. With no gluten-free options among the shop-baked selections, Steuben had to recuse himself from the Wolfgang's tasting.

Lyzette and Zoe were more than willing to sit in for Steuben on the panel. Although they're sisters, Zoe outweighs Lyzette by ten pounds. Zoe coyly declines to divulge her weight, so let's just say that Lyzette weighs nineteen pounds. Oddly, Zoe is the pickier eater of the two, but both girls enjoy a variety of treats and cock their heads at the word "cookie." They also know "bacon," but that would be a different taste test.

Offered a bite of a Wolfgang's cookie, both Lyzette and Zoe were eager to "sit," to "sit pretty," to take a morsel from a stranger and to catch tossed treats in midair. They showed no strong preference for iced over non-iced, or vice versa.

Clearly, pedigreed dogs enjoy Wolfgang's treats, but what about those dogs ineligible for American Kennel Club registry? "Mongrel" and "mutt" are such base terms, n'est çe pas? 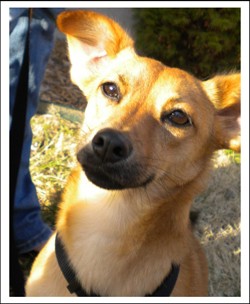 Enter Maggie, who may have a bit of dachshund or a bit of corgi in her, but who basically looks like a smallish yellow dog. Visiting St. Louis for a long weekend from Orlando, Florida, Maggie volunteered to represent dogs of mixed ancestry. Lest anyone question her palate, Maggie rejects Milk Bones; whether on principle or a more specific complaint, she will not say.

Maggie tends to bury her treats under pillows, carpeting, and blankets to save them for later but chose to consume her Wolfgang's cookie right away. Although she spit out the morsel before ingesting it, such is her ingrained habit. Likely owing to some experience in her past, Maggie still hesitates before taking food from strangers, but Wolfgang's treats obliterated any trace of shyness.

The Verdict: Regardless of their breeding, dogs enjoy Wolfgang's treats -- though owners may not see the need for a sugary topping.