Welcome to Girl Walks into a Bar, a weekly Gut Check feature that spotlights local bars and bartenders. This week Chrissy Wilmes profiles C.J. Muggs bartender Melissa Pfeiffer. Below is a Q&A with Pfeiffer, followed by the recipe for her key lime martini. 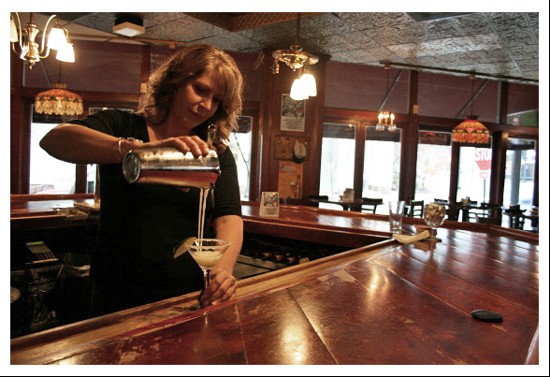 Melissa Pfeiffer has been working at C.J. Muggs (101 West Lockwood Avenue, Webster Groves; 314-963-1976) since the establishment opened its doors in the spring of 1993. She began as a waitress and soon made her way up the ranks.

Nearly two decades later, she's still here. "Webster Groves is a great place to be, it's a very community-oriented location," says Pfeiffer. "People have been walking in the door for eighteen years that I've been here. It's nice to have that level of comfort and acceptance." She often has drinks ready and waiting on the bar for her regulars before they sit down in their stools.

Gut Check visited Pfeiffer at the very Cheers-esque, everyone-knows-your-name Webster Groves location and asked her a few questions about her craft.

My bar is the only bar in St. Louis where... The bartenders have been here as long as the establishment. My fellow bartender Nasia has been here just as long as me.

Girl walks into a bar and orders a ______. She's just earned your undying admiration. What is it? Sazerac. I admire the craft cocktail drinker.

Most dumbass drink anyone's ever asked you for? Any small-batch bourbon with diet soda. Complete degradation.

Other than your own bar, where do you go to get a good drink, and what do you get? We enjoy going to Taste, and [I'll have] pretty much anything Ted puts in front of me. He knows I like bourbon. He also knows I'll experiment with everything. Locally, we usually hang out at the Trainwreck in Rock Hill. That's our "go to all the time" bar.

If my friends and I simply must have a round of shots, what should they be? Usually tequila.

Best/worst/most exciting thing you've ever witnessed at your bar? The worst would be the only fight we've ever had, and it was a gentleman punching a seminarian in the face. A priest-to-be, so very disrespectful. That is the only fight. I believe it started with "Excuse me, Father," and [pantomimes a punch] other than that, everyone's pretty benign around here. [laughs] That was years ago. 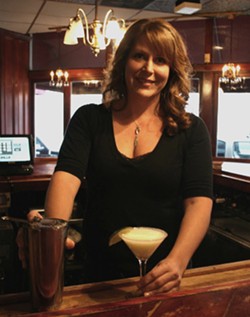 What's the best line someone's used to get a free drink? Oh goodness. I hate to say this, but when people are just blunt enough to say, "Are you gonna give it to me free?" That gets you nowhere!

Tell us something about tending bar that people probably don't know. How rewarding it is. You know, after all these years... I initially didn't think it was gonna be my career choice, but I have no plans on movin'. You meet wonderful people.

Shake over ice. Pour into a glass with salted rim and serve with a lime-wedge garnish.