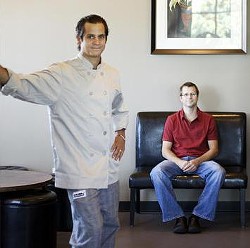 As Adam Tilford prepared to open Milagro Modern Mexican (20 Allen Avenue, Webster Groves; 314-962-4300) last year, he invested not only money, but a great deal of sweat equity. With the help of a friend, he built the bar, laid the tile and did much of the work that can cause other new restaurants to rack up $1 million-plus buildouts.

"The only thing we didn't do is plumbing and electricity," he says -- and that only because the municipality wouldn't have allowed it.

Since Milagro bowed to general acclaim, including from this critic, Tilford tells Gut Check, "The biggest feedback we've gotten has been atmosphere."

To improve that atmosphere, Milagro will close on Monday, April 11, and Tuesday, April 12, for remodeling. (Contingent, of course, upon the necessary approvals from Webster Groves.)

The aim of the remodel, explains Tilford, is to make the spacious dining area "a little more cozy."

"A series of smaller walls [will] create some more intimate areas in the dining room," Tilford says, while in general there will be "a nice separation between the bar and the dining room."

Milagro is also launching a brunch service, beginning this Sunday, April 3, at 10 a.m. Tilford describes this debut brunch as a "trial run," and proceeds will be donated to earthquake-relief efforts in Japan.

The brunch menu will feature traditional Mexican breakfast items like chilaquiles and huevos rancheros as well as a "Bloody Maria" bar.

Also in Milagro's near-term plans? A Cinco de Mayo celebration, of course. The restaurant has permission to use one-third of the parking deck outside the restaurant for its festivities, which will include a DJ and street food.

Tilford recently returned from a personal vacation in Sayulita, Mexico, where he spent some time looking at examples of the trompo, the vertical spit on which the pork for tacos al pastor are traditionally roasted. He plans to build his own trompo and hopes to have it ready for the Cinco de Mayo party.