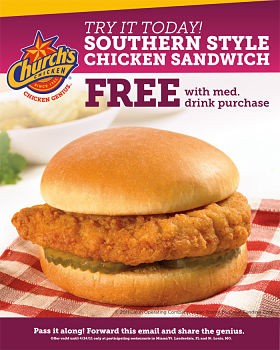 Of all the staples on the fast-food menu, Gut Check has a special place in our plaque-clogged heart for the fried chicken sandwich. The softness of the bun yielding to the crispness of the exterior of the chicken and then the juicy meat inside...it's heaven!

Of course, that's the idealized version and many -- OK, most -- fast-food joints fall short, serving up stale buns and rubbery chicken coated with overspiced breading. (McDonald's, Wendy's, Burger King and Hardee's, we're looking at you.)

It's Chick-fil-A that plays the starring role in most of our chicken sandwich fantasies. Its sandwiches consistently come closest to the ideal -- and with pickles! (We must confess we once tried to make our own Chick-fil-A style chicken at home by marinating it in pickle juice before plopping it on the grill. It was OK, but the juice turned the chicken an unappetizing shade of green.) But lately we've been starting to feel a little weird about eating there. We're as all in favor of Christian values as the next food lover, but when do values bleed into zealotry?

Anyhoo, while we were thinking deep thoughts about politics and fast food, we received an e-mail from Church's Chicken plumping for its new Southern-Style Chicken Sandwich, available (for the time being anyway) only in St. Louis and South Florida. The "Southern"-ness seemed to stem from the fact that it contains pickles, just like a certain other chicken sandwich of Southern origin. Could this provide a worthy rival (and one presumably from a more tolerant source) to the 'fil-A?

Only one way to find out.

There happens to be a Church's right down the street from Gut Check International Headquarters, which meant we could walk, which meant we could enjoy some extra moral superiority because we weren't burning gas to drive out to Des Peres, site of the nearest Chick-fil-A, and instead burning off some of those fried-chicken calories in advance.

"What makes this sandwich Southern?" we inquired of the young man standing behind the counter.

It was just as we'd suspected, though to make it official, we have a call in to Church's corporate HQ. Nonetheless, we also ordered a regular chicken sandwich for purposes of comparison. (Church's also sells something called a Double Chicken N Cheese, with -- you guessed it! -- two chicken patties and two slices of cheese, plus lettuce and mayo. It's reminiscent of the KFC Double Down, only with bread and without bacon.) Can you tell the difference between the Southern and non-Southern versions? 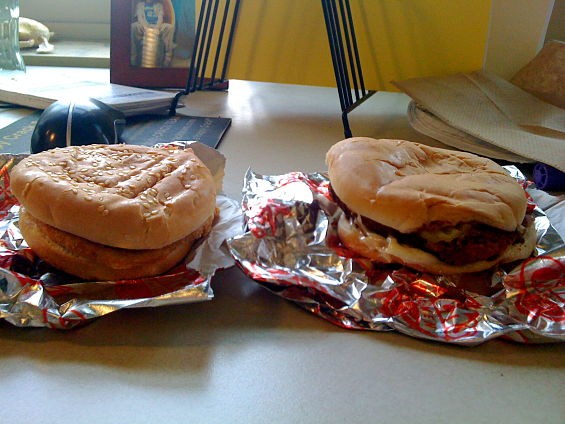 The Southern Style chicken is the one on the right. It's thicker and juicier. (Yes, we detected actual moisture!) The fried crust gives way with a satisfying crunch. It actually tastes like chicken, as opposed to the substance used in the regular sandwich, which is thin and dry and brings back memories of cafeteria steam tables. Don't get us wrong, we liked the old chicken patties just fine. But that was because we didn't know any better. Which is why Chick-fil-A was such a -- dare we say -- revelation.

So the Southern Style Chicken Sandwich is superior to the regular chicken sandwich. But how does it compare to Chick-fil-A?

Answer: Surprisingly well. The Church's sandwich had more pickles than the typical Chick-fil-A product, so much so that we had to remove a couple, but it also comes with mayo, which we regularly dollop onto our Chick-fil-A's (to make them even more perfect).

Is Church's an option for those with their moral britches in a bunch? Gut Check would have to respond to that one with a qualified "yes." But if history is a good teacher, it won't be long until someone uncovers some intolerant Church's deed. (Anyone know of any? Let us know in the comments queue.)

And anyway, we're talking fried chicken here, from a bird that almost certainly lived a short but miserable life on a factory farm before being slaughtered, plucked and converted into calories.

There's probably some reason to feel bad for most of what we eat. Naturally raised oysters have to be flown in from the coast. Ethically raised and slaughtered meat costs a lot, and there certainly isn't enough available for everybody.

Tonight we'll be eating cottage cheese at home. It comes from a plastic container, but at least we'll reuse it. Probably.