Mayans, Beer + Chocolate: What a Combo! 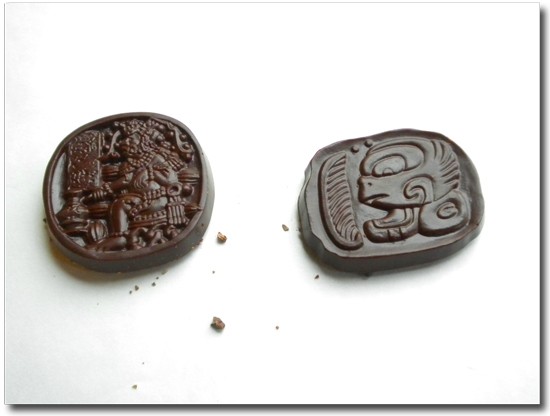 To celebrate its exhibition, Fiery Pool: The Maya and the Mythic Sea, the Saint Louis Art Museum (in Forest Park; 314-721-0072) could have gone in any number of directions.

One direction that was not explored: taking inspiration from one of the objects on display, an eighth-century vomit spoon carved from manatee bone.

Regurgitation aside, Mayan iconography is loaded with food imagery: ducks, corn, alligator. Seafood too: conch and frogs, lobster, shrimp and turtle. One well-to-do Mayan was so fond of his victuals that he had a special platter made for one particular delicacy -- a fact researchers divined by translating the inscription on the plate, which reads: "His plate, his eating-instrument for white venison tamales."

The Mayans were also chocolate lovers. Matthew Robb, the art museum's assistant curator for ancient American and Native American art, notes that there were vessels designed for the express purpose of drinking chocolate beverages. "The Maya word for chocolate was kakaw," Robb tells Gut Check. "On these vessels the syllable ka- is often represented with a fish head accompanied by a sign for the number two. So: ka times two, plus the syllable for wa -- in Maya writing you drop the final vowel -- equals kakaw."

Chocolate and fish? Gut Check once vowed never to return to a restaurant that drizzled chocolate sauce over shrimp. Fortunately, SLAM took a more palatable approach, partnering with locally based producers Kakao Chocolate and Schlafly Beer to develop Beer + Chocolate = Food of the Gods. The event, held at the museum Thursday, March 31, from 6:30 until 9 p.m., features six beer-and-chocolate pairings, along with live music, hors d'oeuvres and tours of the exhibition.

Pairing beer and chocolate made sense to the Mayans. They never played beer pong or debated the place of a lemon wedge in the hefeweizen, but they were all over fermented-corn beverages, and those Mayan drinking vessels would do a frat boy proud -- they hold a quart at the very least. The chocolate apparatus, meanwhile, featured a spout to aerate the frothy hot liquid. Doubtless some anthropologist somewhere has written a thesis on how Mayan methods of chocolate consumption evolved into generations of modern-day children blowing bubbles in chocolate milk.

Cool by Kakao owner Brian Pelletier. "The idea of beer and chocolate is not new to us," says Pelletier, citing the delicious flavor of chocolate truffles made with stout. "Chocolate and beer go better together than a lot people think."

For tomorrow night's event, Pelletier has created solid chocolates in Mayan-inspired molds, as well as truffles and some surprise pairings. (For example, Kakao's Mexican bark, an extra-dark chocolate that contains cinnamon, two types of chiles and cocoa nibs) partners well with Schlafly Pale Ale. Gut Check will take that on faith; there being no pale ale in the immediate vicinity when we visited Kakao, the best we can do is swear that the bark tastes amazing on its own. And you'll have to take our word for that: There are no corroborating witnesses, because Gut Check ate it all.

Along similar lines, Pelletier paid a price for his own empirical research. He describes the pairing process as "really strenuous. Some of those beers we had to go back two to three times to see if they would work."

If you can't make it to the event (tickets cost $75, and reservations are required), the exhibit will remain on display at the museum through May 8. (Remember: Though admission to Fiery Pool costs $8 for adults, it's free on Fridays). You can stroll through at your leisure (be sure to check out the backs of the crocodile effigies, dotted with cocoa nib-like bumps). The gift shop only carries Taza chocolate tablets will be well stocked with Kakao's Mayan chocolate medallions, Mexican hot chocolate mix and Mexican bark, but it's also worth a drive to Kakao's Maplewood outpost (7272 Manchester Road, Maplewood; 314-645-4446), and thence a skip and a jump to the nearby Schlafly Bottleworks (7260 Southwest Avenue, Maplewood; 314-241-2337), where you can devise your own pairings.