Gut Check can think of countless perks of living in a so-called flyover state: no hurricanes, smaller egos and virtually no pressure when confronting the unanswerable question -- 2Pac or Biggie? Here at the crossroads of America, where our most famous rapper was best-known for a singsong cadence and a Band-Aid on his cheek, St. Louisans have the freedom to choose from -- or ignore -- the bicoastal rivalry rather than pledge allegiance to a seaboard.

For example, Gut Check prefers sunshine to grit and our temperament is more laid-back Pacific surfer than wound-up New Yorker. Yet we will take Alicia Keys' "Empire State of Mind" over Katy Perry's "California Gurls" any day, despite Ms. Perry's, um, intimacy with food products.

This time, however, Gut Check felt compelled to leap into the fray with our unbiased Midwestern palate for an appetizing throwdown over a sandwich steeped in tradition.

The Contenders For our East Coast Reuben, we paid a visit to Pumpernickles Delicatessen (11036 Olive Boulevard, Creve Coeur; 314-567-4496), which, it must be said, is in itself an institution. This is a deli that takes itself seriously -- some might say too seriously, but whatever floats your bagel, Gut Check always says -- boasting fare "in the tradition of the great Jewish Delis of yesteryear." The menu lists "Our Reuben" as "The Real Thing!" Menu braggadocio aside, this joint -- also known as Sam & Jake's Pumpernickle -- carries no trace of the New York in-your-face stereotype: It's a bright, cafeteria-style, family-friendly restaurant that could have existed in any era. 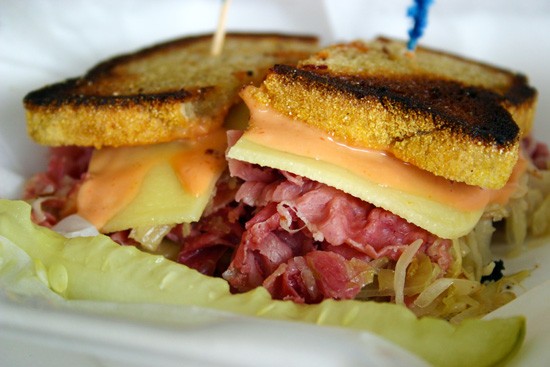 So what "Real Thing" do you fork over $8.25 for? Out came a sandwich in two healthy but not excessively thick halves -- and a pickle. Between two slices of rye bread grilled to golden brown, we found a pile of thinly carved corned beef on a generous bed of sauerkraut. Atop the corned beef was a slice of Swiss cheese that we suspect is intended to be a little meltier, covered with a peach-pink layer of Thousand Island dressing. Though the filling was juicy, it remained miraculously contained within the crisp bread. In much the same fashion, the sour ingredients were subtly muted by the tangy sweetness of the Thousand Island dressing. How to describe it?

Eating this Reuben filled us with the same feelings we get when we watch a Marx Brothers film with Grandpa: This is why things are called classics! They don't make 'em like they used to! Why would anyone mess with a good thing?

In theory, the West Coast Reuben is like a Beverly Hills housewife with a waifish waist and pumped-up pucker: It has replaced each element of the traditional Reuben body -- what God intended -- with a fresh, new substitute. A fine example of this upstart variation is served at Maria's Deli (8332 Lackland Road; 314-426-3444), a small Bridgeton joint opened in 2010 by two young parents: she, also a blogger, and he, a chef who studied French cuisine in Portland, Oregon.

Instead of golden-brown toasted rye Maria's Reuben is served warm between thick slices of dark pumpernickel. In lieu of corned beef, there's a heap of melt-in-your-mouth, lighter-than-white oven-roasted turkey. An unmelted slice of smoked Gouda stands in for the Swiss cheese, but we honestly didn't notice that it affected the overall flavor. Holding down the bottom end is the deli's "special (and secret)" sweet-and-sour coleslaw. Put it all together with a killer spicy-brown mustard, and you've got a sandwich that is full of comforting -- if not typical -- flavors. Sure, it's a turkey sandwich that eschews brine and pickles, but it's succulent and not dull. In fact, it's not even new-age or health-obsessed: it's just...delicious.

The Verdict If it's a Reuben you want, then we have to go with the Pumpernickles original: It's the only one of these two that's actually a Reuben.

That said, if you're craving a turkey sandwich, the Maria's Deli West Coast-whatever is sure to please.