It's barely been six months since Denny's attempted to decimate the American dining population by introducing the Fried Cheese Melt - a grilled cheese sandwich stuffed with fried mozzarella sticks.

For the hearty souls who survived that onslaught, it's time for dessert! 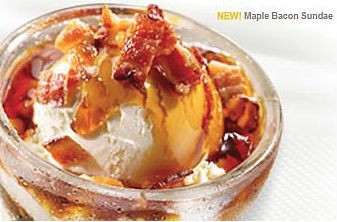 Bring on the Bacon Maple Sundaes, Denny's! And it's just what it sounds like: a big sundae glass full of ice cream, topped with maple syrup and bacon.

It's part of their Baconalia promotion.

They even have mythology to accompany their limited-time bacon-heavy menu of the sundae, BBBLT Sandwich, Triple Bacon Sampler, Ultimate Bacon Breakfast, Pepper Bacon with Eggs, Bacon Flapjacks, and Bacon Meatloaf. A proclamation posted on Facebook states:

Some believe Baconalia to be the last vestige of the Baconites, a Paleolithic trip of fun, bacon-loving people that roamed across land masses with large frying pans in search of bacon.

We're guessing the Baconite tribe died out because they clubbed each other to death with those pans out of frustration over a lack of meat-curing methods. Or, you know, massive coronaries.

The debauchery's going on for two months at a Denny's near you. This dude's already checked it out. Let him be your guide.