Kold-Draft: The Machine Behind the Ice Revolution

If you've read this week's article on the ice revolution in mixology -- if you haven't, hurry! before it melts! -- you know that its local origins can be traced back to Ted Kilgore, now of Taste, using a Kold-Draft ice machine to Monarch when he worked there.

Indeed, for many bartenders, Kold-Draft -- which was founded in Dayton, Ohio, in 1920 and since 1926 has been based in Erie, Pennsylvania -- is the gold standard in ice cubes. What sets Kold-Draft ice apart?

"Our ice is known for its perfect shape, purity, hardness, and slower melt rate," Kold-Draft President and COO Marty Gardner writes Gut Check via email. "That means it not only looks better, but also lasts longer in storage bins, cocktail sinks, and, of course, the carefully crafted cocktails of mixologists." 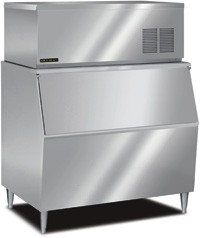 Gardner says he's "not really sure" when mixologists began depending on Kold-Draft ice, "but
we started hearing how bartenders wanted to use ice that bespoke the distinction of their cocktail offerings. They sought large, solid, crystal-clear ice cubes that would mimic chipped or cut block ice."

The Kold-Draft process is more complicated than simply freezing water, explains Gardner: "Our 'upside-down' ice-making process eliminates impurities. Visualize an upside-down ice cube tray. We use a similar ice tray, called an evaporator. The evaporator is refrigerated and has individual ice cube cells. As the water circulates continuously through the cell, it forms ice smoothly on the cold surfaces, eliminating air and flushing away impurities, producing one perfect ice cube per cell.

"Pure water freezes first, so the water containing mineral impurities is washed down and out through two drain holes located under each cell. This leaves only pure water frozen into Kold-Draft cubes."

Gardner says that while his company has worked with mixologists in the past -- donating ice machines for use during charity events, for example -- they haven't yet had to modify any of their systems based on bartender feedback.

However, he adds, "we invite feedback at every show and from our web site. In fact, we welcome feedback from your readers as well!"