It's Girl Scout Cookie season, and Gut Check is celebrating by taking a more-than-cursory glance at this annual sugar and saturated-fat bacchanalia and, well, kinda throwing up in our mouth.

In our first episode, we decried the non-nutritive abominations known as Peanut Butter Patties, or as they were formerly known and still are in some regions of this great land, Tagalongs.

Today we move on to Caramel deLites, which we'll tell you right now contain nothing remotely resembling caramel and are anything but deLiteful. They once were known as Samoas (and still are in some markets), a name that is doubtless intended to evoke the image of a tropical paradise, owing to the presence of coconut (or some facsimile thereof). Ooooh, how exotic! Or, now, Caramel deLites -- whatevs.

The concept here, for those who to this point haven't managed to focus clearly, is to direct attention to this simple but sad fact: Girl Scout Cookies, which are marketed by adults toward children to sell to other children (via their proxies, a.k.a. Mom and Dad), are, when you get right down to it, lumps of artificial glop, blended together, baked and then packaged so as to appear to be edible.

Let's have a look at the label that adorns a box of Caramel deLites -- quickly, because Gut Check's gorge is already a-risin': 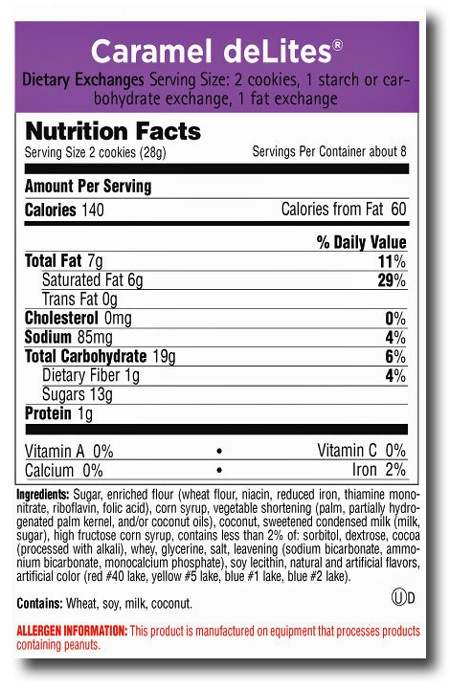 Um, excuse us for a minute as we re-read the ingredient list from the Peanut Butter Patties we threw up here the other day...brb...

Yeah, OK, of course the ingredients lists are nearly identical. A cookie is a cookie is a cookie, and maybe these particular two varieties share more in common than some other randomly selected pairs of Girl Scout Cookies. But you gotta admit it's kinda barf-inducing when you look at these two substances simultaneously...

...and consider that what differentiates them is the presence of peanuts and corn syrup solids (Patties) versus corn syrup, coconut, sweetened condensed milk, sorbitol, dextrose, whey and glycerine (deLites). And yeah, we'll concede that one Girl Scout Cookie's "natural and artificial flavor" (Patties) can't be blithely assumed to be another's "natural and artificial flavors" (deLites).

Some, like the dude on the right (the bald one on the bottom, we mean; not the handsome fella on top), have argued pretty persuasively that the old saw about humans and chimpanzees sharing 99 percent of of one another's genetic makeup is, like, really misleading. Fine. Gut Check's gonna go out on a limb here and posit that the similarities between our two Girl Scout Cookies here do not create an analogous instance.

Except maybe in the sense that if you handed a kid a Peanut Butter Pattie and a Caramel deLite, the little sucker would almost certainly eat both of them, and if you performed the same experiment with a chimp, the result would, 99 percent of the time, be identical.

Note: If you'd like to suggest which Girl Scout Cookie Gut Check vomits up next, by all means use the comments thread. We're here to hurl.