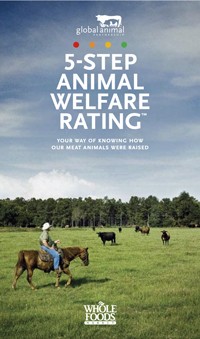 For more than seven years, the Whole Foods Market chain has been working on a program that the company believes could revolutionize the livestock industry.

"As you go up through the steps, 5+ being the highest right now, what we're trying to do is change the way producers are creating these products and do it in a way that's more respectful to the animals and a way that's better for the end consumer," explains Anna Stein, an associate team leader in the meat department at the Whole Foods in Brentwood. 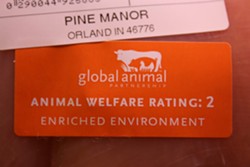 Whole Foods says it doesn't carry any chicken, pork or beef whose sources fall below Step 1.

But the grocery chain has defined four additional steps that build on that baseline. Criteria include providing adequate shade in pasture areas, limiting travel time from farm to slaughter and keeping animals outdoors as much as possible.

Midwest Whole Foods locations staged a "soft launch" of the rating system in February, and began solely stocking rated poultry, beef and pork for the official launch at the beginning of March, other than a small supply of leftover unrated beef products. Although there are producers with 5+ ratings, Brentwood Whole Foods doesn't carry them yet. 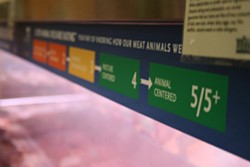 "The highest producer we currently have is a Step 4, and that is an entirely pasture- centered lifestyle.," Stein explains. "The only time that these cows go indoors is when the weather is inclement or if there is a severe situation where the pastures are flooded [or] there's a landslide, something that would prevent them from their natural forage. They only take them indoors for their safety."

Essentially, Whole Foods hopes to see less-stressed animals whose improved lifestyles will produce better meat and make everyone involved in the process -- up to and including the consumer -- feel good about it. "If you treat animals great, you get a better product," says Stein. "It's a lot like having a vine-ripened tomato as opposed to a tomato that's ripened in a hothouse. You can see a difference in the quality. Science has shown us through time that simply giving them the space and the kind of diet that they need and giving them the time and the opportunity to show what that can do -- they'll surprise you every time."

The chain isn't yet prepared to apply its litmus tests to other edible creatures -- including turkey and bison, not to mention lamb and veal. "It's taken us seven years to put together the standards just for three categories, and these three categories represent the bulk of what American shoppers, in the Midwest especially, are purchasing," notes Stein.

This calls for a scene from Portlandia.