Ever since we moved to St. Louis, we've been hearing about the awesomeness of toasted ravioli. And, frankly, we just didn't get it. So you fry a li'l pocket of pasta? Why, pray tell, is this even necessary?

Then we ordered a plate -- and then we ordered 'em again. For the record, we didn't seek out the best versions in town, those rave-worthy ravs handmade by the Hill's master bakers. We just wanted to try a few platters at a few random Italian joints to see what the fuss was all about.

We expected to be confused, and perhaps even a bit dismissive. But we're pleased to report that, thanks to one of these places, we now totally get it.

The Contenders
We chose two classic Italian red-sauce joints. First, Massa's in Bridgeton (4120 North Lindbergh Boulevard; 314-739-3894) because one of our favorite people is always raving about the cannelloni there.

For the uninitiated: Massa's is a tiny stand-alone restaurant just off Lindbergh, near Lambert Airport -- and while from the outside (as our favorite person warned us) it looks like a shed, on the inside it's got an extremely cool hole-in-the-wall vibe. There's dark wood paneling, framed art that suggests an earlier era (including Ms. Marilyn Monroe herself) and candlelight...pretty much no light other than candlelight, in fact.

The good news is that we loved the cannelloni. The bad news is that the T-ravs, well, let's just say they didn't exactly float our boat. They seemed exactly what we'd expected: a little square of fried pasta filled with mystery meat. What's the big deal? We liked the sauce Massa's gave us for dipping -- with lots of meat, as well as slivers of carrot and onion, it was almost more of a bolognese than a marinara. But the fried ravioli? Not so much. We lapped up our dipping sauce and then turned our attention, happily, to our entrées.

It was a different story when we gave the St. Louis treat another try, this time at Vito's in midtown (3515 Lindell Boulevard; 314-534-8486). We've long loved the pizza here, as well as the handsome dark bar. Damned if we didn't love the toasted ravioli, too! 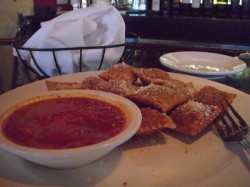 Again, here we found pasta, mystery meat and tomato sauce for dipping. But somehow, we learned, if you fry these little guys so that they're puffed full of air, and then you dust the slightly crisp surface with finely grated Parmesan cheese and then you drag 'em through a tangy marinara -- it really is a version of Heaven!

Indeed, as we popped the last one of our dozen Vito's ravioli into our mouth, we were reminded of how we feel when plowing through a bag of tortilla chips and a jar of good salsa. It's the combination of textures, perhaps, and the way the salty Parmesan hit our tastebuds just so. It's a guilty pleasure, and it's positively addictive.

The Verdict
Vito's. It's all about the way these babies taste when the hot oil crisps the exterior and puffs up the interior, the way the manage to be both solid and airy. We'd definitely go back to Massa's for the cannelloni, but when it comes to everybody's favorite St. Louis treat, it's Vito's all the way.