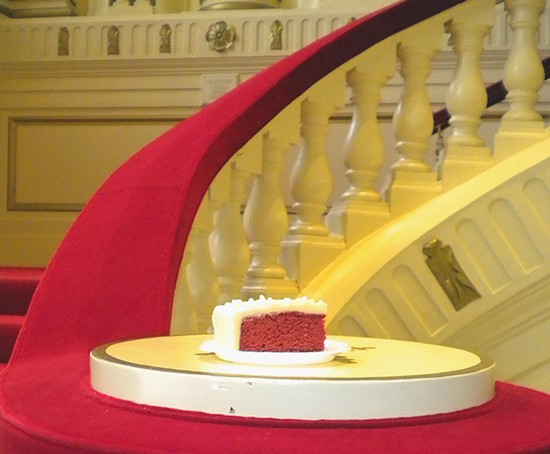 That's the way Gut Check likes to think of our boss. (But only with the utmost fondness.)

Like on Friday night, when he re-blared a late-breaking press release from the St. Louis Symphony Orchestra--

(St Louis) - The St. Louis Symphony introduces the Powell Hall Red Velvet Cake at this weekend's concerts. The cake was specially designed for the Symphony by its sole cake vendor, Sugaree. A red velvet variety was chosen as a nod to the Powell Hall auditorium, whose seats are covered in red velvet. Pat and Jimmy (Sugaree owners/bakers), started from a German chocolate cake and worked tirelessly in developing the recipe. The result is striking in its appearance, and will be an ideal complement to the Powell Hall pastry menu.

--and ordered Gut Check to get off our divan, where we'd innocently been nibbling pâté and sipping a margarita, and make haste to Powell Symphony Hall to partake of said Red Velvet Cake.

A troubling development, though we relished the prospect of exposing our delicate, shell-like ears to a program of Shostakovich and Rachmaninoff. Dunno about you, but the onset of the latter's Symphony No. 2 never fails to throw us into a fugue state that culminates weeks later with a significant breakthrough in our ongoing psychoanalysis. It would be interesting to observe how red velvet cake would rock that particular boat. Plus, we could verify that it truly does match the seat cushions.

There ain't no flies on Sugaree Baking Company, a Dogtown stalwart that local brides-to-be have long turned to in their hour of nuptial need.

So off we did hie.

Powell's administrative offices were closed and Gut Check's insider ticket connection (one of the violinists) was a late arrival, so we were reduced to sweet-talking a box officer into letting us in to buy a piece of cake. (Ah, well, no Rachmaninoff's No. 2!)

Red velvet is not a staple of Sugaree's pastry kitchen. For years, owner Pat Rutherford-Pettine flat-out refused to bake the southern treat.

"I'm always very cautious about using dye," she explains. In addition, most red velvet recipes call for vegetable oil, and Sugaree eschews trans fats, baking only with with butter.

But when the symphony wanted to add a red velvet cake to their concession-stand menu, Sugaree reconsidered and ultimately consented. In concert with symphony tasters (yes, that's a pun), the bakery went through three different recipes before arriving at a combination that pleased all parties. The first attempt was based on a German chocolate cake instead of the more traditional base of devil's food. The second was colored so intensely red that tasters felt they could almost detect the dye.

The final version bears more of a rich raspberry hue than the deep red often found in red velvet cakes. The cake is moist, with a flavor that can most kindly be described as refined. Traditionally, vinegar and buttermilk provide red velvet cake's trademark tang. Most of the tang of the SLSO cake, on the other hand, comes from a rich layer of delicious cream-cheese icing that, if anything, threatens to overpower the subtle flavor of the cake beneath.

To sum up: Moist cake, though a little bland. Excellent icing. And yes indeedy, the color is a fine match for those seat cushions.

For now, brides who want a Sugaree red velvet cake remain out of luck. The Powell Hall Red Velvet Cake is available in the symphony venue's lobby. The price is $5 a slice, plus the cost of a symphony ticket (unless you're Gut Check).