Jeff Ruby Knows How to Make an Exit 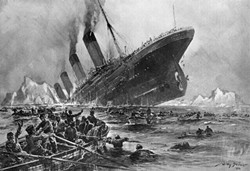 Yes, almost half a year has passed since Jeff Ruby's Steakhouse closed its first and only St. Louis location at River City Casino, but Gut Check remains obsessed with the Cincinnati-based restaurant. Partly because it served the best damned steak we've ever eaten. Partly because its demise was so sudden and (if the scuttlebutt is to be believed) so spectacular.
Hence our interest in this story, via Pro Football Talk (more on that in a moment): Jeff Ruby's Waterfront, which is situated on a barge on the Ohio River, broke free from its mooring in flood-level waters Friday evening:

Covington Fire Department Capt. Chris Kiely said Jeff Ruby's Waterfront restaurant drifted about 85 to 100 yards down the fast-flowing river during the busy Friday evening dinner hour before the popular seafood eatery came to a stop beside a towering bridge as nervous dinner patrons looked on. He said 83 people were safely rescued after an hourslong effort that concluded early Saturday

So, why did I come upon this story while reading Pro Football Talk? Seems Cincinnati Bengals great and NBC Sports analyst Cris Collinsworth -- who has a dish named for him at Jeff Ruby's -- was at (aboard?) the restaurant at the time.
Those who followed the saga of Jeff Ruby's St. Louis location on Gut Check will understand why I chuckled at the final line of the AP article:

Calls by The Associated Press to phone numbers listed for the restaurant and Jeff Ruby were not immediatley returned early Saturday.

Good luck with that.