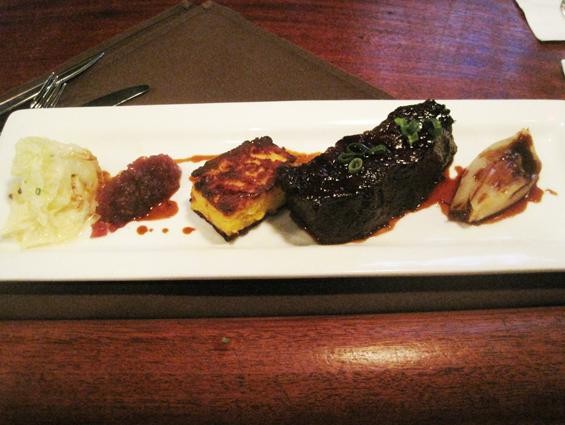 I've lauded the cooking of Monarch executive chef Josh Galliano so often in my reviews and on Gut Check that choosing a favorite dish from his arsenal should be easy. Except that, like any good chef, Galliano is restless and daring, and you don't follow his work so much as try to keep up.

So let's just say that the beef short rib braised in root beer, a relatively new addition to Monarch's menu, is my favorite dish of his right now, subject to change by the time I finish writing this post.

The short rib dish strikes a balance between the refined, modern technique that has won Galliano acclaim at both An American Place and Monarch and the more casual, Southern-influenced direction that Monarch has taken over the past year.

Arranged from left to right across the plate is wilted cabbage, a red-onion marmalade, a piece of spoonbread, the short rib and a roasted onion.You can admire how, despite being "wilted," the cabbage's texture is delicate, almost velvety. Or you can simply enjoy the spoonbread's simple, comforting goodness.

The short rib is the focal point, of course, a thick, flavorful hunk of meat. The root beer flavor is there, but subtle, its sweetness softening rather than swamping the beef. That root beer is Galliano's own recipe, by the way -- it's even available on draft -- a sure as sign as any that, even when it comes to soda pop, one of our very best chefs leaves nothing to chance.