Welcome to Girl Walks into a Bar, a weekly Gut Check feature that spotlights local bars and bartenders. This week Chrissy Wilmes profiles Schlafly Bottleworks bartender Megan Andreini. Below is a Q&A with Andreini, followed by the recipe for the Bottleworks' signature bloody mary.

Schlafly Bottleworks (7260 Southwest Avenue, Maplewood; 314-241-2337) might just occupy the cultural epicenter of Maplewood. And why wouldn't it be? On a breezy day, the wonderfully homey smell of hops wafts through the neighborhood, luring the populace toward its entrance, which sits between a lovely patio (complete with firepit) and two ginormous beer tanks.

Aside from brewing a wide selection of craft beers, the Bottleworks occasionally serves as a music venue and a farmer's market, not to mention a movie house (for Webster University's monthly Strange Brew) and even a yoga studio. Schlafly also hosts a score of educational events covering a diverse array of topics -- everything from beer to religion to environmental issues to women's issues and back to beer again.

Still, these community activities only supplement what keeps the Bottleworks ticking: beer. To celebrate its second decade of beer production, Schlafly did what any self-respecting brewery would: used it as an excuse to brew a special beer, the 20th Anniversary Imperial Stout, which currently occupies a position on the chalkboard beer menu, alongside staples like the Pale Ale and experimental limited batches like the Black Currant and Cherry Cider.

In order to enjoy any of those offerings, of course, requires a bartender.

Meet Megan Andreini. She's the smiley, sweet brunette with the feather in her hair who's about to pour you a perfect beer. Megan has been tending bar at the Bottleworks for three and a half years now, and prior to that she put in a year and half as a server. (She racked up previous experience tending bar at the now-defunct Bahama Breeze in Chesterfield.)

Megan took a break from a Sunday brunch shift on Mardi Gras weekend to whip up a cocktail over which to tell us about what the Bottleworks is like from the other side of the bar.

Your bar is the only bar in St. Louis where... Everyone's friends when you walk in.

Girl walks into a bar and orders a ______ . She has just earned my undying admiration. Dry-hopped APA. It's not my favorite, but it's a beer drinker's beer.

The most dumbass drink anyone's ever asked for. Bud Light. [laughs]

Other than your own bar, where do you go to get a good drink, and what do you have? I usually go up the street to Boogaloo, and I usually drink Captain and diet.

If my friends and I simply must have a round of shots, what should they be? Brass balls.

Best/worst/most exciting thing you've witnessed at your bar? I was here when the Cardinals won the World Series. That was a fun night!

What's the best line someone's used to try to get a free drink from you? It isn't necessarily a line -- it's just a general sense of being overwhelmingly nice, or new to town. Like if somebody drove in to try something specifically St. Louis.

Your favorite drinking ritual? The Sunday-night-after-the-weekend-shift drink. After the craziness of the weekend, that Sunday-night drink is nice. 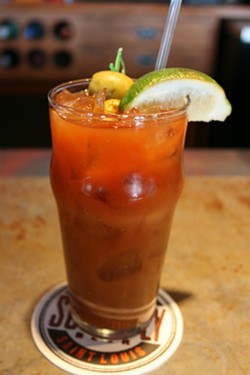 Pinch of salt and pepper

Garnish with olive and lime