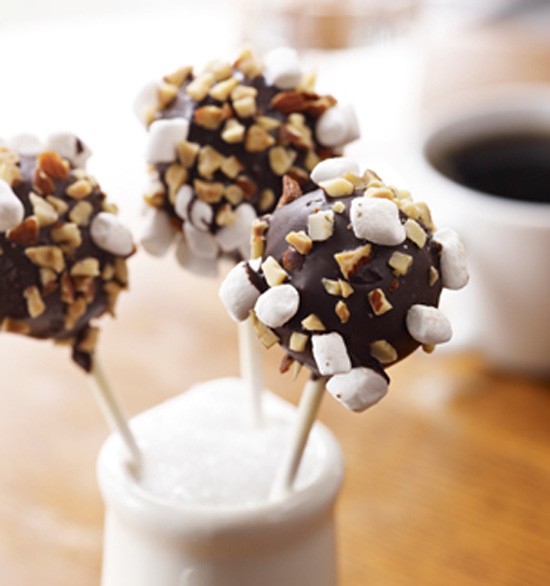 Starbucks kills you with kindness -- one cake pop at a time.

After recently unveiling the "trenta," its colossal coffee vessel, the big 'Bucks now announces a new line of sweet treats called Starbucks Petites. Among the diminutive, under-200-calorie sugar-bombs, Gut Check is most interested in the cake pops; the concept appears to have been lifted verbatim from our "Wildest Dreams" diary.

The pops come in three flavors that all feature chocolate in some form. There's Birthday Cake and Rocky Road, but the Tiramisu sounds deadliest: "Vanilla cake and Starbucks® coffee with vanilla icing, dipped in mocha flavored chocolaty coating, with a chocolate coffee bean."

Because nothing goes better with coffee and sugar than more coffee. And sugar.

In the unlikely event a ball of chocolate-coated cake-on-a-stick doesn't prove sufficiently irresistible, the coffee chain is offering a FREE Petite item with the purchase of a "handcrafted beverage" between the hours of 2 and 5 p.m., today, Thursday, March 10 through Saturday, March 12, as supplies last. Starbucks calls the promotion "Tribute Days": [insert your own "evil empire" reference].

Starbucks claims it is rolling out this new selection of bakery goods in celebration of the company's 40th anniversary...but we think they're just trying to throw us off the diabolical tip jars story.