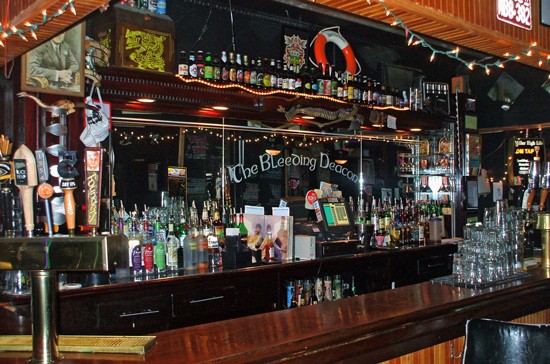 The Scene: The Bleeding Deacon is a pub with personality. By which we mean that it is what it is, and what it isn't is worried about what anyone makes of what it is. Forget it. Just order a beer. The place is equally proud of its beer list, which fills a large chalkboard and includes everything from obscure microbrews to a 40-ouncer of the week, as it is of its very vegetarian-friendly menu. The décor is dive-bar chic, as is the service. Imagine a bartender who's simultaneously laid-back and attentive. Now order another beer. The menu's a rung or two above "bar food," but it eats like bar food. Like so many things about the Bleeding Deacon, you'll have to decide for yourself what to make of that. We liked the zingy lemon-coriander hummus appetizer a lot, but we could have used a little less zing in our veggie burger (and a little less toaster time on the bread. So we ordered a beer.

Why You'll Go Back: Most of the $3 draft options, like the seasonal O'Fallon Black Hemp, are brews you've wanted to try but either haven't found elsewhere or haven't felt like committing to a pricey six-pack. If you support local brewers, this is a great place to do it. Plus they have a 40 of the week.

The Verdict: OK, the food doesn't always live up to its ambition. But you didn't come here for culinary rapture. Three beers cheers for a bar that's off the trendy track and well worth a visit.