#15: Pappardelle at the Tavern Kitchen & Bar 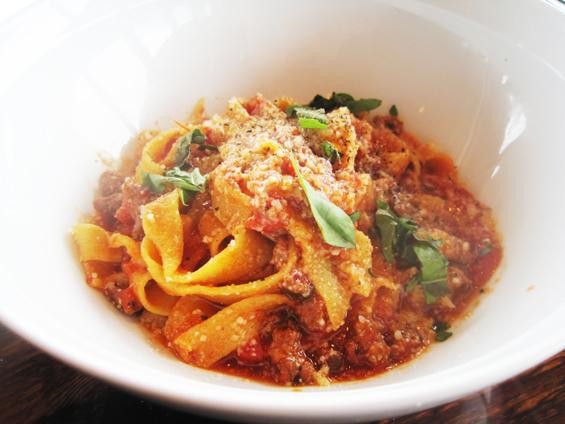 The housemade pappardelle with stewed tomatoes and Italian sausage at the Tavern Kitchen & Bar could not be less ostentatious. You might skim right past the dish while reading the menu -- aside (perhaps) from the fresh pasta, it's the sort of thing you're more likely to make yourself for a weekday dinner than order at one of the area's more buzzed-about new restaurants.

It is served in a plain white bowl: flaxen ribbons of pasta slicked with sauce. Tomato is the dominant flavor of this sauce, rich, with a fleeting sweetness. The sausage adds depth, but this is emphatically not a meat sauce -- you have to dig around to find a piece of sausage larger than a pebble. Basil and grated Parmesan cheese provide the final accent. Yet the highlight of the dish is the pappardelle itself, its texture lightly chewy, its flavor very mild, nothing more complex than egg and flour but, unlike dry pasta out of the box, definitely there.

In truth, writing this many words about the dish feels excessive. You don't have to think about it, just enjoy it, one forkful at a time, until, suddenly, the bowl is empty. When your server stops to ask if everything was OK, you reply, "It was good."