Chips and Salsa Off the Old Block: A Visit to Señoritas Pique 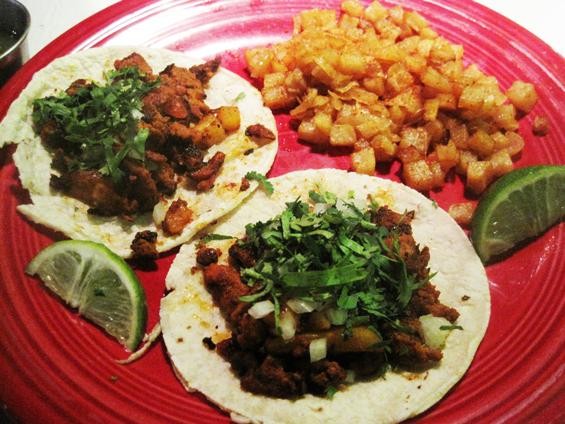 Does that mean nothing to you? Well, then, what if I told you that at this Mexican restaurant attached to a Quality Inn in Sunset Hills, you can order the official dish of Gut Check, tacos al pastor?

Señoritas Pique (3730 South Lindbergh Boulevard, Sunset Hills; 314-849-2886) is smaller than its big brother, but it retains the same balance of authentic and what the menu delightfully terms "gringo" Mexican that has won Señor Pique so many fans.

The menu does have fewer dishes, but not that many fewer. Most of the "Favoritos de Maria" are here: enchiladas de mole, parillada (the ur-fajita) and the smoky, spicy chile morita con puerco, one of my 100 Favorite Dishes.

The tacos al pastor -- the lunch portion, two tacos with two sides, is pictured above -- are a fine example of the form, with little bits of pineapple adding sweetness to the achiote-seasoned pork.

Both Señor and Señoritas Pique are notable for having a wider array of side dishes other than rice and refried beans (though both of those are available), like papas piocositas (potatoes seasoned with chile pepper and lime and sautéed with onion) and elote (corn on the cob with mayo, queso fresco and lime as well as chile-lime seasoning).

The margarita menu is quite long. If you try to sample too many in one visit, remember: There is a hotel within stumbling distance.