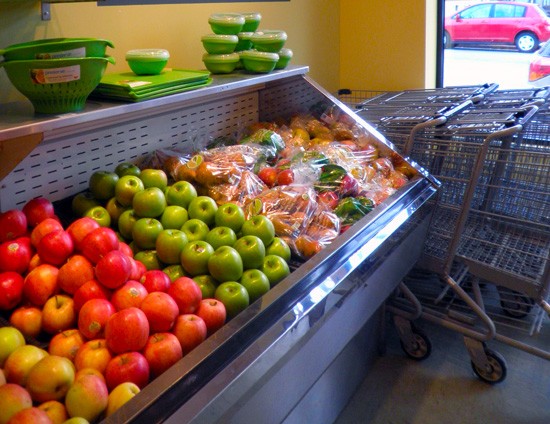 Back in September Gut Check mentioned that Local Harvest Grocery in south St. Louis would move to a larger location at 3108 Morgan Ford -- just 450 feet from its current home. This Sunday, March 6, is opening day, so we checked in with the market and found that the place has made beaucoup progress without going far.

The expanded prepared-foods section will include more dishes made at Local Harvest Cafe & Catering; in addition to hummus, dips and salad dressings, there will be offerings such as quinoa salad, ham-bone soup and vegan sausage (all of which Gut Check had a chance to sample at last night's store preview. 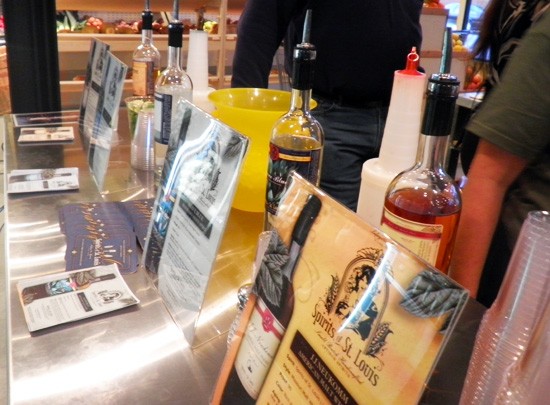 Local Harvest, named "Best Grocery Store" by RFT in 2008 and 2009, may have graduated to wider aisles -- and, yes, actual shopping carts -- but as its name implies, the focus remains on high-quality products from the local community. That includes booze, and Ramona Marten of St. Louis-based distributors Classique Wines, and Steve Neukomm and Molly McKenna of Square One Brewery & Distillery were on hand at the preview to strut their stuff.

Having sampled Square One's Spirits of St. Louis-brand liquors, Gut Check is overjoyed to announce that we will be entering into a long-term relationship with the aged JJ Neukomm American Malt Whiskey and (we're polyalcoholamorous) the ultra-smooth Blue Agave tequila -- one of only two tequilas distilled in the United States.

The soon-to-be-former Local Harvest location has remained open during the transition and still houses a lot of stock. This remaining merchandise will be moved tomorrow, Saturday, March 5, by a corps of volunteers forming an old-fashioned "bucket brigade" and passing items hand-over-hand down the sidewalk. That event starts at 4 p.m. and will feature color commentary via megaphone, kids dressed up as carrots and a free chili-and-cheap-beer dinner to reward the manual laborers.