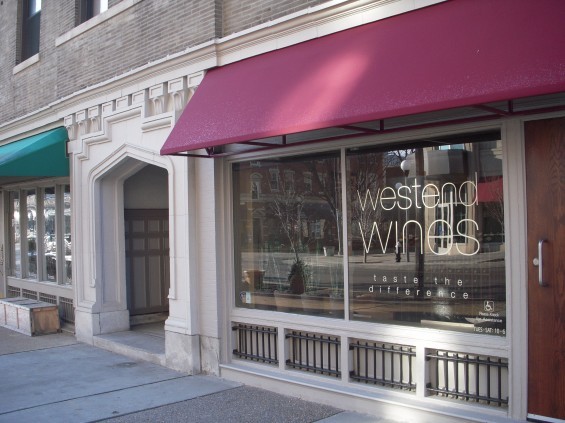 Renee Skubish learned the wine trade in New York City -- studying for her certification as a sommelier and working at the New York-based company Italian Wine Merchants.

Now she's brought her talents to a city better known for its thirst for beer. She and her partners (an investor and a consultant who have asked to be unnamed at this point) have opened West End Wines in a 1,000-square-storefront on Laclede, just off bustling Euclid Avenue in St. Louis' Central West End.

Skubish says the shop will focus on personalized customer service. "I know all the wines because I've had a hand in selecting each and every one of them," she says.
Until recently, the 1,000-square-foot shop used to be the sales office for the Park East Tower high-rise across the street. After a remodel, West End Wines opened February 4 -- right in the middle of the ice storm that virtually shut down the city. Since that week, which Skubish acknowledges was incredibly slow, the shop is starting to draw some foot traffic.

West End Wines sells wine and only wine. There are racks of white, sorted by price point, and even more racks of red, sorted by varietal, and then by price point within the varietal. Customers will find everything from a $9.50 Chardonnay to what Skubish calls "the most decadent, powerful, balanced wine I've ever had" -- a Guiseppe Quintarelli from Veneto, Italy, which retails for $385.99.

"You sip it and it's just that good," Skubish promises.

Skubish, 32, grew up near here in Collinsville, Illinois (for those wondering the answer to the classic St. Louis question, she went to Triad High School). She says she loved the seven years she spent in New York, but when family issues made it imperative that she move back home, she was also happy to return. "New York was everything to me," she says, "except one important thing: It was never home."

The shop is open Tuesday through Saturday from 10 a.m. to 6 p.m., and Skubish plans to be on the premises during every one of those hours.

"I'm it," she says. "I greet customers, I talk to them about the wine, I check them out. No wine or no job is too small. I sweep the floors, I get the windows washed and I sell Giuseppe Quintarelli."