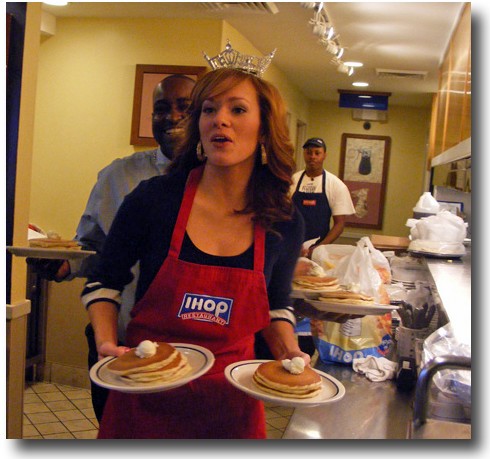 The flapjack festivities fired up early this morning at the Clayton Road location (8049 Clayton Road, Clayton; 314-725-8798), when Miss Missouri 2010, Erika Hebron, joined James Frew, the 2011 local child ambassador for the Children's Miracle Network, in flipping up free pancakes for patrons. Gut Check was there to watch as the staff taught James and his brother Daniel grilling and flipping techniques. During a live shot with KSDK-TV (Channel 5)'s Heidi Glaus, James flipped pancake batter on the TV host on a bet with the camera crew.

A sixth grader from Swansea, Illinois, James receives treatment at Cardinal Glennon, having been diagnosed with leukemia nearly two years ago. His mother, Marcie, says the family loves the Children's Miracle Network "because the money stays local." 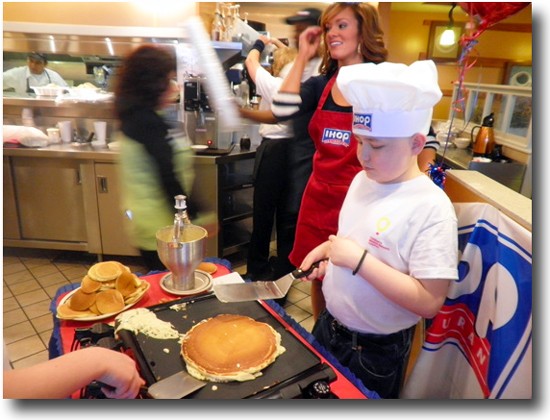 CMN communications director Phil Sholts says the group chose Frew as ambassador for his character and outgoing personality. Last year, after seven Xbox games were stolen from the playroom at Cardinal Glennon's oncology ward, James initiated a Facebook campaign for donations of new and used games to replace them. The Facebook page and the attendant media coverage left Cardinal Glennon with more Xbox accoutrements than they'd had to begin with.

Translation: The short stacks are going like...well, you know.