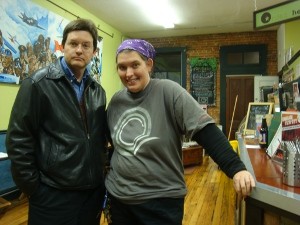 One of the only coffee shops in north St. Louis has abruptly shut down, but a devoted couple has promised to keep residents caffeinated under a new banner.

For two years Urban Studio Café in Old North St. Louis (on the same block as Crown Candy) has been the only coffeehouse in the historic neighborhood. The café wasn't a business per se, but rather an offshoot of a larger arts organization called Urban Studio; in addition to serving java, the space existed as a gallery, with a rotating exhibit of works created by local artists.

But when the coffee operation failed to turn a profit, its umbrella organization, the social-services provider Grace Hill Settlement House, forced it to close last Saturday.

That decision didn't sit well with residents Veronica and David Holden, who say the space means too much to the community to be shuttered for good. They have taken steps to relaunch the location as a new business under a new name, La Mancha. The Holdens hope to reopen as soon as possible after a public hearing at St. Louis City Hall on March 17.

"We're neighbors, we love this café and we don't want to see it go anywhere," says Veronica, who has served as the manager of Urban Studio Café for the last four months.

If successful, the venture will be a labor of love for the couple. Veronica Holden has pledged to take over full-time management duties, supported by a volunteer staff. David Holden recently left his full-time job with a recycling company in order to stay home with the couple's kids. They are prepared for a loss of income.

Says Veronica: "We're not doing this for the paycheck."