England vs. Australia may sound like a cricket match, but it's merely the latest Fight Club Sandwich installment: battle meat pie.

The two nations may share one language and a similar gene pool, but culturally they're as far apart as they are geographically. One is planning a royal wedding; the other is home to spiders the size of your hand. Both are islands, but one is nearly 60 times the size of the other. OK, technically England isn't an island; Great Britain is. Still, Australia is really freaking big; England, not so much.

The Contenders In the red corner we have the Melton Mowbray Pork Pie from Queen's Cuisine (qconline.us; 618-205-6188), available online or at local farmers' markets.

Tasting a Melton Mowbray Pork Pie requires a bit of planning. They must be ordered by phone or via the Queen's Cuisine website, then delivered or picked up at a local farmers' market such as Tower Grove or Maplewood. 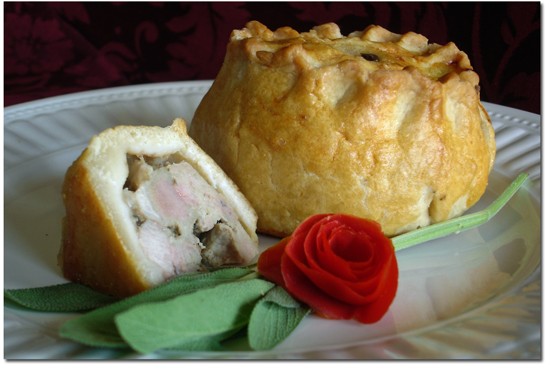 This pie is dense and hefty enough to make a light lunch. The outer crust, with its soft flakiness, covers a shape the size of two stacked hockey pucks and has a crimped top. Inside, the meat is finely chopped and densely packed, a bit like a very firm pâté. A plastic fork won't make a dent in this pie, which, if you're a glass-half-full kind of person, means it'd make for great bag lunches.

Traditionally the meat filling contains a gelatin layer, but Jane Muscroft of Queen's Cuisine offers a plain version, friendlier to American palates wary of unflavored gelatin (and/or American sensibilities that get all Wayne's World whenever the topic of aspic arises). Carnivores should fear not the animal hoof: If you eat marshmallows, you're eating gelatin anyway. The gelatin version of the pie softens some of the density of the meat and defends against dryness.

The pie tastes best at room temperature with several dollops of chutney or ketchup. At $7.50 a pop, plus the cost of the condiments, they're not exactly cheap, but the amount of labor involved in producing each pie, from chopping the meat to hand-forming the pastry, is significant.

In the blue corner, we have the Australian Meat Pies from south city's Silver Ballroom (4701 Morgan Ford Road; 314-832-9223): Mere minutes after you place your order, the Australian meat pies arrive at your table hot and steaming, in a paper basket. Each day the kitchen serves up four varieties: pork, beef, vegetarian and a seasonal surprise.

In the past, the seasonal surprise has featured a chili-mac filling, and there are rumors of an andouille/red-beans-and-rice version for Mardi Gras. The pork pie contains stew meat-size hunks of pork, while the beef-and-cheese contains ground meat. Both pies came with plenty of juicy gravy, with the pork version tasting quite peppery. (Yes, we did mention there's a vegetarian pie. And no, we aren't evaluating it in this space. What part of "Battle Meat Pie" do you not understand?)

The top piecrust is reminiscent of puff pastry, while the bottom is far more substantial, thus managing to avoid sogginess -- crucial when you're talking this much gravy. The bottom crust is so substantial, in fact, that the pie holds its shape without a pan.

At $5 apiece, the pies make a great bar snack, but it would be easy to put away two or even three of them in a (hungry) sitting.

The Verdict It's a draw. Both piemakers produce tasty products. But, much like their heritage, these meat pies couldn't be more different. With the Melton Mowbray, you can sip tea at the farmers' market and spend $5 for a dozen eggs. With the Australian pies, you can have a smoke and a beer and drop a few coins into the Playboy pinball game.

Which you prefer depends on you -- or your mood.