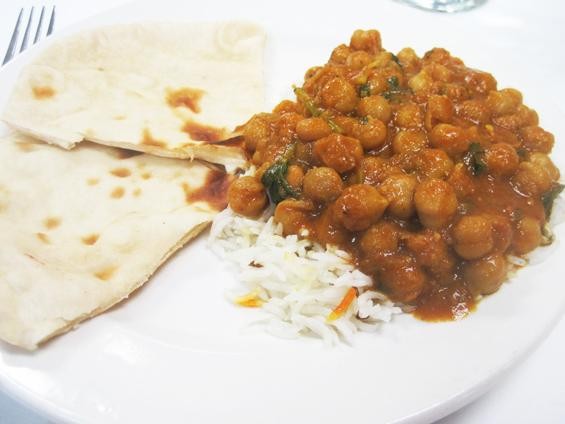 Raj's Rasoi, a small, homely restaurant at one end of a small, homely Maryland Heights strip mall, serves only vegetarian dishes. (On Wednesdays it goes even further, offering only vegan dishes on its lunch buffet.) Even an avowed carnivore such as myself doesn't mind because in the grand tradition of Indian cuisine Raj's Rasoi prepares delicious vegetarian meals.

Of these, my favorite is the channa masala.

Chickpeas are the "meat" of this dish, yet their flavor is secondary to the sauce. This is tomato-based, though it is so rich with spices that the tomato is less the defining note than the bass line. There are warming notes of clove and cardamom, brighter notes of onion and ginger and a gradual heat that lingers in the back of your mouth.

Raj's Rasoi has channa masala on its à la carte menu, but it often appears as part of its lunch buffet, which is a terrific value at $6.50 (Tuesday through Thursday) or $6.99 (Friday through Sunday) a person.