The official opening for the new Taste at 4584 Laclede Avenue is next Monday, February 28, but the recently relocated-from-Benton-Park spot staged a soft opening this past Thursday, February 17, for family and friends and one special party, an editor from Food & Wine who was in town checking out Farmhaus and Bogart's Smokehouse and wanted to see new owner Adam Altnether's interpretation of the bar founded by Gerard Craft. (At the new location, the bar has been rechristened with a shortened name: Taste, as opposed to Taste by Niche.)

By Altnether's calculation, he was at the restaurant working nearly nonstop from 8 a.m. Wednesday until 3 a.m. Friday. At midday Wednesday the walls remained unpainted, the tables unassembled and the kitchen unplugged from the electrical grid.

"I called my parents and told them to get down here now," Altnether recalled during a press event at the now-fully functional space last night. "They said they were working. I told them, 'Get down here!'" Within hours, the senior Altnethers were sanding and painting along with the rest of the staff.

Altnether reached his breaking point when the workers who were scheduled to get the lights and appliances up and running said they wouldn't be able to make it till Thursday afternoon.

"That was when I nearly threw my phone across the street," he said. "They said, 'What's your hurry?' I said, 'I'm opening a restaurant!'"

Amazingly, adds Altnether, his staff is still speaking to him.

Somehow everything got finished by 6 p.m., Thursday, leaving Altnether two hours to decompress and gear up before Food & Wine arrived. (The editor had asked to dine at five o'clock; Altnether told her no way.) Altnether had assembled his mise en place in his old workspace, the kitchen of Brasserie by Niche next door and was able to commence cooking as soon as Taste's new kitchen was operational at 1:30.

"It was a good thing," he said. "We would have had to show her the menu and say, 'Well, you can't have this and this and this, but the cold cuts are Boar's Head and locally sourced from Schnucks.'"

The story has a happy ending. Altnether's assembled guests enjoyed an exclusive Taste treat, and his best server saw to the Food & Wine table. ("It would have been sad," he joked in retrospect, "if we'd had to fire someone before we'd even officially opened.") And the editor told Altnether she loved the space, the food and the drink. And then Altnether got to go home and sleep. 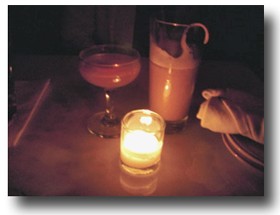 For the most part, the new Taste resembles the old Taste by Niche, only there's more. The space is dim and cozy, but far bigger than the old -- it seats 54, four times the capacity of the Benton Park digs -- and slightly more elegant, reminiscent of a Parisian bistro. There's a small loft area with a long table and leather armchairs, which will be reserved for private parties.

Ted Kilgore's cocktail menu is now organized by flavor ("Rich, Dark, Bold", "Crisp, Light, Aromatic") and encompasses just about everything the mixological magician has ever invented, only you no longer have to list the random ingredients you happen to remember from last time in the hope that he'll know what you're talking about.

For the record, Gut Check sampled the "Duck and Cover" (a concoction of mezcal, vermouth and duck fat Grand Marnier, lighter and much, much less disgusting than it sounds), "In a Pickle" (gin, St. Germain, falernum, lime, dill and cucumber, like a boozy pickle) and the "Gold Coast Fizz" (whiskey, walnut and cherry liqueurs, espresso syrup and egg whites, like a subtle Irish coffee) and found them all delightful.

The cocktail menu dwarfs the food menu. Altnether has jettisoned most of Taste's signature dishes, including the octopus salad, the meatballs and the pasta, and replaced them with Niche-ier fare. That is to say, it is extremely heavy on swine. Which is by no means a bad thing. There's candied bacon, bacon deviled eggs, pork fries (strips of pork breaded and fried), a pork burger and a particularly luscious cut of pork belly served over white beans. Not to mention the famed pigwiches: bacon crème sandwiched between two pig-shaped chocolate wafers.

(There are foods of non-pig origin as well. Just in case you were wondering. The crisp trout was quite tasty, though overshadowed by the chips that accompanied it.)

In the end it was impossible to tell Taste's transition had been so frantic. The space looks new and shiny, and everything is in its place. And if the emergency opening accomplished anything, it made Altnether believe that from here on out, running a restaurant will be a piece of cake. Even one that will be open every night till 1:30.

By the way, we've got a call in to Food & Wine; we'll update if they've got anything pithy to add.