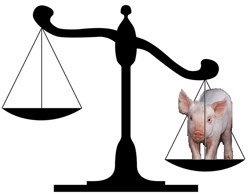 Not all family farms are small affairs. The Maschhoffs' LLC in Carlyle, Illinois -- one hour east of St. Louis -- is technically a family farm, in that it's owned by a family. A family that owns nearly 200,000 hogs.

No, this isn't an episode of Confessions: Animal Hoarding. It's business-as-usual for a giant pork corporation that sells meat to more than 10 million customers annually. They recently acquired NPP LLC in Nebraska, along with 50,000 sows divided among 80 farms in Nebraska, northwest Iowa and South Dakota, according to a recent story in the Belleville News-Democrat.

Just how many dagum hogs is that?

Way-ull, let's just say there's a seat for each hog at Standford Stadium. Perfect for if the Standford Cardinal ever plays the Arkansas Razorbacks. Woooooooo. Pig. Sooie!