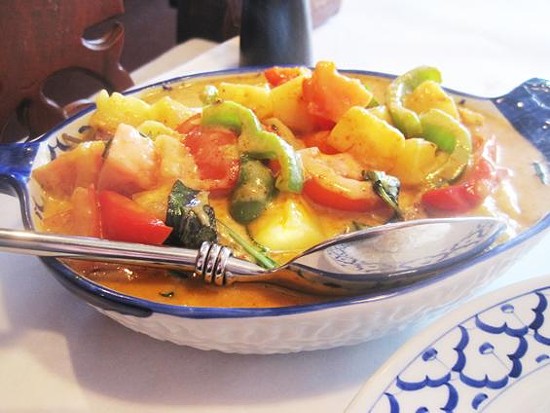 Gang kua ped yang is a red curry with roasted duck meat. You can't see the duck meat in this photograph. Trust me, though, it's there, five or six thick hunks of tender, flavorful meat, part of one of the best dishes I ate last year.

Here is how I described the dish in my review ("Dear Addie," October 21, 2010), with a few slight modifications based on my most recent experience:

Remarkably, though the duck was chopped into half a dozen pieces and served (along with tomato, red and green bell peppers, basil and pineapple) with at least part of each piece submerged in the curry, the skin retained much of its crispness, with just enough fat rendered that the meat gained flavor without losing its luscious nature.

Like all good curries, this one was too complex to pinpoint any one ingredient; its initial brightness yielded to a good balance of savory and sweet and a lingering chile-generated warmth. Even at four stars on a four-star spiciness scale, the heat didn't obscure the subtle seasoning, and along with the verdant flavor of the lightly wilted basil, it provided a necessary counterweight to the sweetness of the coconut milk and pineapple.