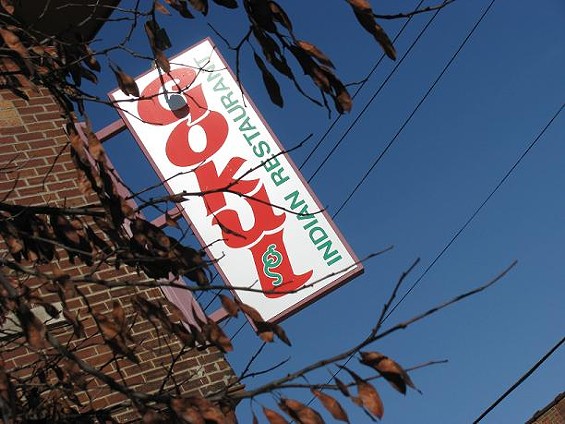 We were ridiculously excited to try Gokul, the new all-vegetarian Indian eatery that just opened on Delmar, a few blocks east of the Pageant Theatre (6101 Delmar Boulevard; 314-721-1888). For one thing, we looooove us some Indian food. For another, we'd heard raves about this place from friends who used to make the pilgrimage to its first location, Gokul Snacks and Sweets, on Page Avenue near Interstate 270. It even won Best Vegetarian Restaurant from the RFT in 2009.
The good news is that -- on first impression, at least -- Gokul No. 2 doesn't disappoint.

While during these first weeks of operation, the new Gokul is only serving a buffet for both lunch and dinner in lieu of à la carte options, the food was satisfyingly flavorful. All the standards are here, and even a few we weren't aware of, including a dish of fried potatoes and eggplant. In case you were wondering: Yes, the Indians are great with potato wedges, too.

We especially enjoyed the raita (Gokul's version is studded with crisp vegetables, including carrot chunks) and the rich aloo matar, a dish of potatoes and peas floating in a creamy tomato sauce. There had to be a week's worth of saturated fat in that dish, but dear God, we aren't complaining!

The owners assure us that when they begin to serve the full menu next week, it will be the exact menu as they serve up on Page. The only difference is that they'll be getting a kosher certification to serve the neighborhood's large population of Orthodox Jews.

We're also pleased to report that Gokul shows the same attention to its new space as it does to the raita. The walls are washed in a sunny yellow, with bright orange cloth napkins on the table and charming little Aesop-inspired illustrations on the glass atop the buffet.