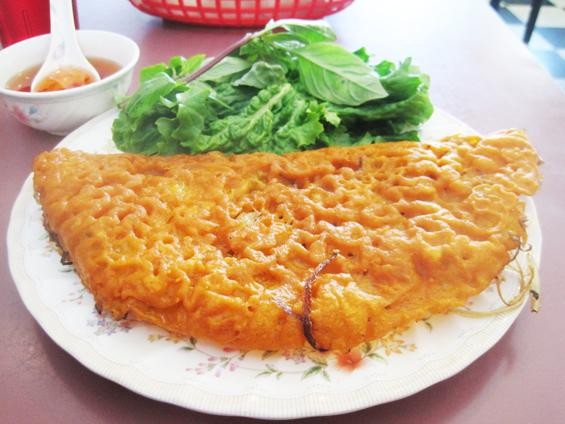 It looks like an oversized Parmesan crisp. In fact, it's a savory crêpe. And at a restaurant where you can close your eyes and point at the menu and know that you'll get something great, it's my favorite dish: bánh xèo.

This isn't the soft crêpe of French fame. Made from rice flour and then pan-fried, bánh xèo has a crisp, even brittle texture. The flavor is lightly sweet, an ideal foil for its contents: fatty grilled pork, shrimp, bean sprouts and onion.

Served on the side but more or less mandatory is Banh Mi So #1's wonderful nuoc cham, the sauce a touch funky, a touch sweet, with a gradual (but never overwhelming) heat.

The restaurant lists bánh xèo as an appetizer, but you can easily enjoy an entire order as a small meal or, as I did on this visit, pair it with the excellent banh mi dac biet sandwich.

#25: Mojarra dorada at Garduño's Mexican Food
#26: "It" at Mammer Jammer
#27: Two eggs over-easy, bacon and hash browns at the Courtesy Diner
#28: Seafood at Farmhaus
#29: The "Edgar Allan Poe" at Dewey's Pizza
#30: The "Heart Stopping BLT" and a chocolate malt at Crown Candy Kitchen