In its February issue, QSR Magazine, which covers the fast-food industry waterfront, names Pi Pizzeria's Pi on the Spot among the Top 20 food trucks in the nation.

Writes Daniel P. Smith of QSR (which we're pretty certain stands for Quick Service Restaurant -- a euphemism for what everyone else calls fast food):

Serving the "best of" deep-dish, cornmeal-crust pizza from its brick-and-mortar stores, Pi on the Spot blends award-winning dishes with philanthropy and business savvy.

Pi uses an iPad as its POS, constructs a mini-park with bistro tables and artificial turf for diners, offers WiFi access, donates remaining product to local food banks, and makes weekly stops at charitable fundraisers, all of which cements its spot as a St. Louis wonder. 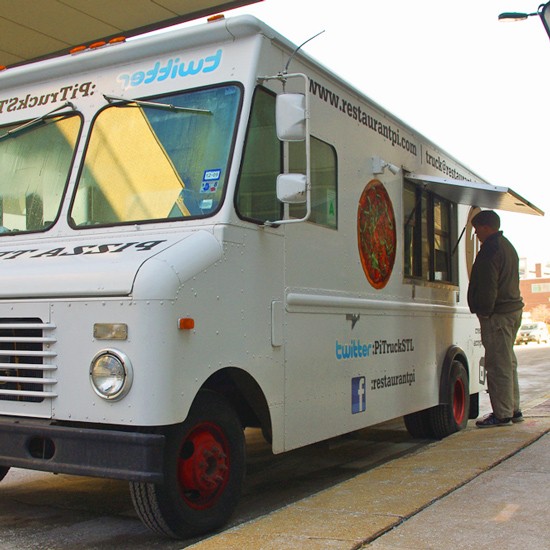 With all due deference to Pi and its (admittedly awesome) pizza wagon, if you ask Gut Check it's a wonder St. Louis merits mention at all on such a list. Heavens to pepperoni, you can count the number of food trucks in this town on the fingers of one hand. Next to cities like LA, Seattle and Portland (Oregon), we don't even register.

But Gut Check isn't one to see our deep-dish pizza pan as half-empty. Food trucks have most certainly arrived -- even here! -- and they're bound to stay awhile, and multiply.

We've got a call out to Pi's Chris Sommers for comment....

"We're incredibly honored and humbled to be amongst such well-known and well-operated food trucks, particularly when most them are based in the coastal cities," Chris Sommers says when Gut Check catches up with him by phone in Washington, D.C. "To be in that league is amazing for us and great, we think, for St. Louis. Hopefully it'll encourage more people to do the same."

Sommers is on the road to launch Pi's second food truck, which is set to hit the streets of D.C. tomorrow. He hints that on the home front come spring, Pi will double the capacity of its St. Louis truck and dress it up with a brand-new colorful wrap.