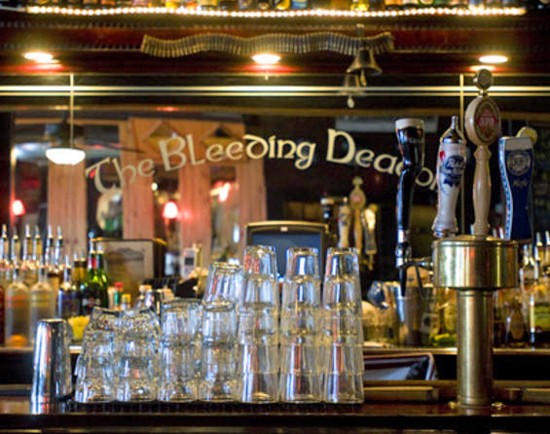 Over at Daily RFT, blogmeister Chad Garrison has a post about the various ways in which some Missouri legislators are attempting to undermine the already tenuous livelihoods of our state's low-wage employees.

Of particular relevance to Gut Check is the effort on the part of some lawmakers to pulverize Missouri's minimum-wage law. The current law, which passed by a whopping margin in a 2006 referendum, calls for increases to Missouri's minimum wage to be pegged to inflation.

Both Rep. Jerry Nolte of Gladstone and a fellow Republican, Sen. Jason Crowell of Cape Girardeau, are sponsoring bills that would permanently set Missouri's minimum wage at the federal level.

As anyone who has ever worked in a restaurant knows all too well, tipped employees don't earn minimum wage for base pay. Missouri's law requires tipped workers' to receive base pay of at least 50 percent of minimum wage. At Missouri's current minimum hourly wage of $7.25, that's $3.63 per hour -- and a strong contingent of restaurant execs is looking to make certain it doesn't go up.

But while the new bills are backed by a formidable lobby that includes national chain restaurants, some local restaurateurs think they're a crock.

After the jump, the text of a letter to legislators from pub owner Michael McLaughlin, who owns and operates one of RFT's fave watering holes, the Bleeding Deacon Public House.

I am writing to ask for your strong opposition of House Bill 61. It is scheduled to come before the house soon, and I feel that your opposition to this bill could play an important role in defeating it.

I got my start working in the restaurant industry 15 years ago in Tulsa, OK, as a prep cook. In 1997 I relocated to Saint Louis and got a job at a restaurant where I worked as a dishwasher and a busser. As a busser, I received tips. In 2001, I began waiting tables and later bartended, until I opened my own restaurant/bar "The Bleeding Deacon." My current position is owner/operator, but I still bartend there occasionally when needed.

Everyone is aware of the financial difficulties and economic uncertainties visited upon small businesses in Missouri, but I believe that lowering wages would be a critical mistake in the long term overall health of our economy. Lowering wages, especially on the lower end of the earnings spectrum, will diminish the amount of money going into the pockets of workers in Missouri, thus lowering spending, stimulus, etc... In addition to the basic fact that people find it hard to live on less wages, the state will miss out on revenues generated by the taxes at the current (higher) hourly wage. Because their hourly wage won't begin to cover their share of the payroll taxes and benefits, many servers will be forced to pay more out of pocket at tax time, and many will receive negative pay checks in the interim. You can easily see where these issues of revenue and spending are a slippery slope for many small restaurant employees. Besides, the rise in minimum wage was intended to reflect the overall rise in the cost of living, which affects all citizens, so I don't understand why ALL workers wouldn't be included. As a restaurant owner, I feel that all of my employees should receive the same respect and standards, regardless if they are tipped or not.

The standard argument I hear as to why this minimum wage is detrimental to Missouri restaurants is that it is "killing" the industry. This is a gross overstatement of facts. Many restaurants and bars unfortunately go out of business. The truth is that the restaurant/bar industry, is, always has been, and will continue to be a risky venture. It takes a lot of stars to align, as well as ambition to succeed in this industry. Labor costs are not generally the primary expenditures, and don't cause restaurants to fail As an industry, we enjoy some of the lowest labor costs of any out there, and most owner/operators take advantage of paying workers the minimum wage allowed. This current rate is completely within the average accepted percentage of labor costs industry wide, and taking away wages that are already being paid seems like an accident waiting to happen, as people are already struggling to make ends meet at every level of the economic ladder.

Thank you for your time and careful consideration of this matter. If you have any questions or require any additional information, please do not hesitate to contact me.