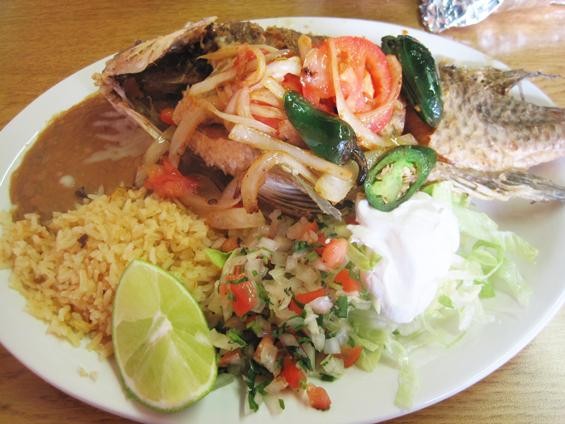 There aren't many places in St. Louis to get a decent fish taco. My personal favorite fish taco isn't even listed as such on the menu. I build it myself at Garduño's Mexican Food on Cherokee Street.

The mojarra dorada is a whole fish, lightly battered and then fried. The exterior is lightly crisp, the flesh exceptionally moist. The flavor is very mild. (Think tilapia -- indeed, as I understand it, mojarra and tilapia are often used interchangeably, though there is a separate species called mojarra.) Which is why you want to use the fish as the base for a taco.

The fish is topped with onion, tomato and jalapeño, and there is also pico de gallo, sour cream and a lime wedge (as well as rice and beans) on the side. Fold these components however you like in corn tortillas (provided, though not pictured), and you have a fish taco so tasty that you can almost hear the dayboat chugging back out to sea.

#26: "It" at Mammer Jammer
#27: Two eggs over-easy, bacon and hash browns at the Courtesy Diner
#28: Seafood at Farmhaus
#29: The "Edgar Allan Poe" at Dewey's Pizza
#30: The "Heart Stopping BLT" and a chocolate malt at Crown Candy Kitchen