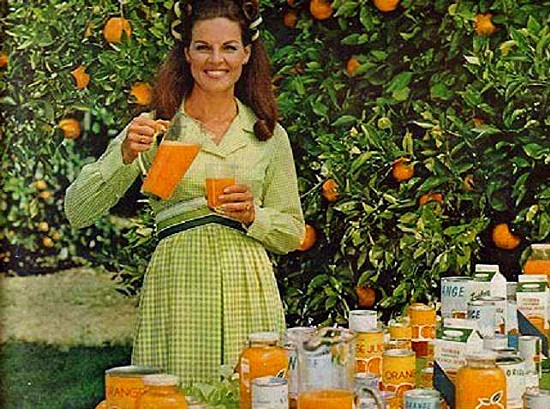 For years dear ol' Mom has starred in orange juice commercials. Because who else buys orange juice? Not Dad; he's too busy and important. Not kids. Left to their own devices, they'd consume nothing but Yoo-hoo and Fun Dip.

Advertising Age reports that with declining sales, the orange juice market wants an edgier image. Charles Torrey, VP of marketing at Minute Maid, explains, "We want to be bold and a little edgier. It's really taking snapshots of things that consumers can relate to and situations that are relevant to their daily lives. We don't want to do just the same family scene: Mom around the table with 2.3 kids and half a dog."

(Confidential to Mr. Torrey: Half a dog lapping a bowl of Minute Maid and regenerating lost parts would make a kickass o.j. ad.)

Much like a wife after the fifteenth wedding anniversary, citrus has lost its luster. "Orange juice has not been able to capture the magic it once had for consumers," says Garima Goel Lal, senior consumer analyst at market researcher Mintel.

Clearly, the time has come for a look back at the great moms of o.j. advertising...

10. The former beauty queen and pop star Mom whose sunny disposition thinly veils the fact that she'll cut off your junk if you dare decide to be teh gay. Oranges are a pure, natural fruit. Unlike you.

9. Negligent voiceover Mom who's going to spend the whole damn day cleaning up after you kids and your juice-making. A mallet? Child, what the hell were you thinking? Go to your room right now. And leave that bowling pin with me. It's mine now.

8. Mom (and Dad) have no authority over their brat, who looks as though he has had his face buried in a mountain of cocaine. Robert Loggia has to come over every morning for backup.

7. Want some Bacon with that o.j.? Hot Mom with one degree of separation from Kevin Bacon. No small-town preacher's going to keep Kyra from dancing.

6. Lazy modern Mom who doesn't love her family enough to squeeze oranges. 5. Submissive Mom who prepares breakfast at the whim of Sir Husband and his pack of adorable henchkids.

4. Overworked, underappreciated Mom who's mixing her o.j. 50/50 with Smirnoff the second those little shits are on the bus.

3. AWOL Mom who's so busy searching for the big O that Dad's stuck feeding and juicing the children.

2. Delusional Mom under the impression that orange juice will keep her from a rage-induced stroke caused by the morons that surround her.

1. Mom who desperately wants to be liked by her kids and their friends, even if it means forgoing orange juice for orange drink.