Eclipse's Lucas Ramsey Takes the Mystery Out of Cocktails 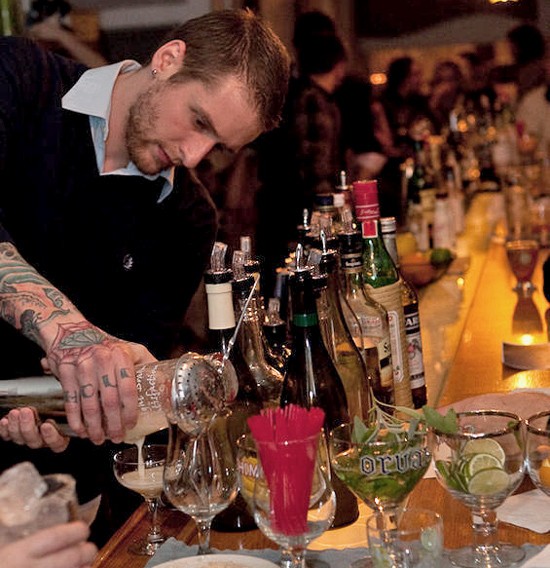 Lucas Ramsey, bar manager at Eclipse Restaurant in the Delmar Loop's Moonrise Hotel, not only works magic with elixirs, but on the drinker's psyche as well. One Saturday night, when faced with a gin-phobic patron, he poured sips of three gins -- standard Tanqueray, Knickerbocker from Michigan's New Holland Brewing, and Germany's classic Schlichte Steinhager Dry Gin. In the middle of the night's rush, Ramsey took the time to explain the differences in the three samples to his customer, create a gin-based cocktail to her liking and send her upstairs to her room, smug in her newfound knowledge.

It's only natural that Ramsey should put his educating skills to work. "I love booze," he writes via e-mail. "My favorite part of the job is interacting with people. It's fun to bartend when people get more out of their experience than a good drink."

He's not developing a schedule, instead letting interest and demand dictate the topics he covers. For now the tutorials will be informal Q&A sessions.

What can participants expect? "Initially, a hand-drawn menu with each recipe and instructions on how to make each drink. All drinks will be eight bucks."

Ramsey wants customers to gain "a little more about cocktails or spirits than they knew before. If anyone is interested, I'll share everything i know about the week's topic. But if someone just wants the basics, that's what they'll get. I don't want to over- or underwhelm anyone. Hopefully everyone will walk out having had a good time, a little more knowledge and a growing interest and excitement for hand-crafted cocktails."

Ramsey's well-versed in cocktail culture. The St. Louis native attended college in Oregon and earned a degree in studio art but found work as a bar bouncer. He worked his way through the bar ranks. "Most places I worked were more beer-and-shot type of bars, so my interest in cocktails didn't develop until the last two or three years. Nearly all of my education comes from reading books on spirits, flavors and cocktail history. It also really helps to be surrounded by people who also care about the craft of the bar. The United States Bartenders' Guild has been a big help, along with having cocktail-nerd friends who wanna talk recipes and theory."

With Bad Apple Cocktails, the circle of cocktail nerds will certainly widen.