Across the state, Dr Pepper's trying to appeal to men who enjoy diet soda but hate how drinking it makes them look oh so very girly. The Kansas City Star reports that the company's test marketing their new product, Dr Pepper 10 to the beef-loving cowboys in Kansas City.

The newspaper says, "According to the company, Dr Pepper Ten was developed with a 'one-of-a-kind, proprietary sweetener technology to deliver the taste experience of regular with just 10 bold calories'" 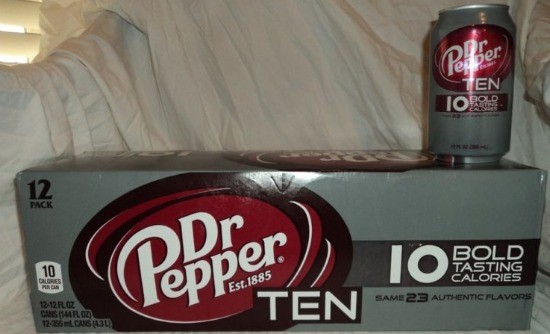 Because if you're going to endanger your masculinity with diet soda, those calories damn well better be bold! Not like those frou-frou calories in that sissy-ass ten calorie version of Vitamin Water.

"Dave Fleming, spokesman for the company in Plano, Texas, said that though many people liked the taste of diet soda, research showed some men thought they were giving something up when they drank a diet product."

It's a dilemma as old as saccharine itself - how to drink diet soda without turning into a total girl. Here's a look at what soda companies have tried in the past to get manly-men to drink girly diet drinks.

During the 2009 Superbowl we met the Pepsi Max men, who would rather get electrocuted, have bowling balls dropped on their heads, and nearly take a projectile 2-by-4 up the ass than suffer diet soda.

Fear not, Mountain Dew lovers! The diet version is just as intense and surprising as that peace-brokering puss Abe Lincoln turning into a pro wrestler.

Batman digs Diet Coke. You want to grow up to be like Batman, don't you?

Oh, he's up for it, alright. He's up for Diet 7-Up and the babe in the white bikini. Could the NutraSweet be responsible for the borderline display of 'roid rage?

Nothing says "masculinity" like Alex Karras, the Detroit Lion/pro wrestler-turned-Webster's-dad. He's the all-American man: football, wrestling, dad, drinker of Faygo Diet Redpop. He is everything the American man aspires to be.