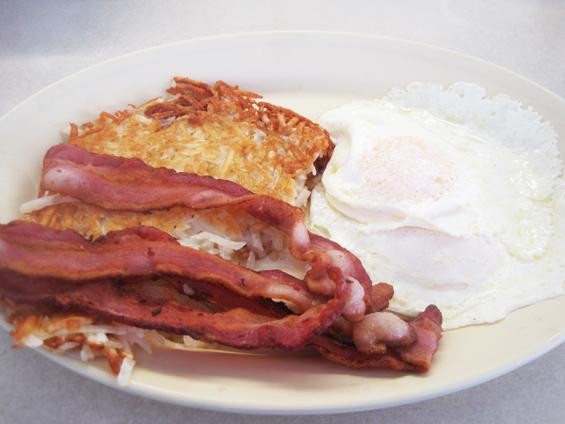 Denny's isn't America's diner. There's no such thing. Instead, there are tens of thousands of diners, each different in its own way, however slight those differences might be. Everyone has his or her favorite. Mine is the Courtesy Diner, and this -- two eggs over-easy with bacon and hash browns (and toast, of course) -- is what I pretty much always order.

I know there are restaurants where the eggs are better, the bacon thicker and more flavorful, the hash browns not from a box. But I also know that here the eggs will be exactly over-easy, the bacon crisp, the hash browns nicely browned on top and not too soggy underneath. The coffee refills arrive without asking, and the sizzle of the next round of bacon and eggs on the flattop eases me out of the fog of the previous night and into the patter of another day.

1. This is the Courtesy Diner on Kingshighway. The one on Hampton just doesn't have the same ambience.

2. It is odd -- wonderfully, wonderfully odd -- to sit in the Courtesy Diner and not be enveloped in cigarette smoke.

#28: Seafood at Farmhaus
#29: The "Edgar Allan Poe" at Dewey's Pizza
#30: The "Heart Stopping BLT" and a chocolate malt at Crown Candy Kitchen