It's been three years since beet juice made its way to the ice melt market. Missouri's a big fan; the Missouri Department of Transportation used over 258,250 gallons from July 1, 2008, to June 30 2009. It's cheap, uses a product that would otherwise go to waste - the junk that's left after beet sugar's extracted, and leaves behind the delicious taste of beets.

Not that we know for sure. We're not licking the streets or eating the beet-brown snow.

It's not just beets that can stop the skid. Storm-slapped Bergen County, New Jersey, has turned to using pickle juice to thaw icy roads. Time reports that the county's snow removal budget's been decimated, so they've turned to something Jersey doesn't lack - pickle juice. At seven cents per gallon, it makes beet juice - $1.83 per gallon - look like a bad financial move.

There's no confirmation if the green liquid melting the ice in New Jersey is repurposed from consumed pickles, or just another brine, which always melts ice and makes a delicious roast turkey.

Tests are underway at Gut Check International Headquarters to see if pickled beet juice could be the answer to our ice storm nightmares. 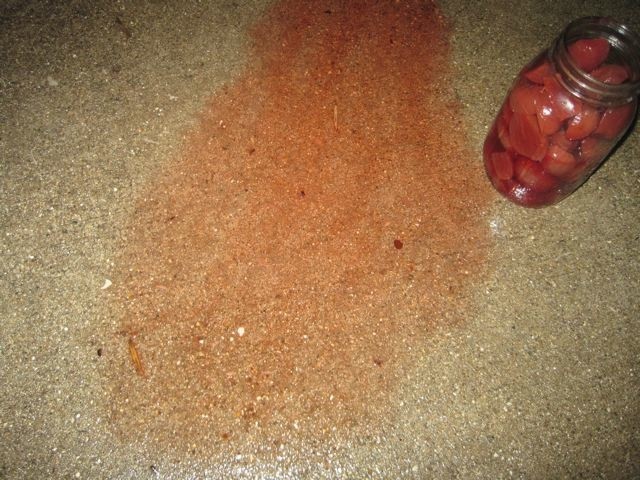 Alas, a check at 2 p.m. this afternoon indicates that pickled beet juice is no match for an inch of sleet, but is delicious in a bloody Mary.