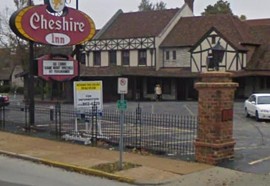 A committee of the St. Louis Board of Aldermen was informed this month that downtown restaurant stalwart Tony's is expected to vacate its location on Market Street to take up residency at the remodeled Cheshire Inn near the intersection of Clayton Road and Skinker Boulevard.

St. Louis-based Lodging Hospitality Management (LHM) purchased the Cheshire Inn (located inside the St. Louis city limits) and the adjoining Cheshire Lodge (a hotel in Richmond Heights) last fall and is renovating both properties. In November Bob O'Loughlin, chairman of LHM, told the St. Louis Business Journal he wanted Tony's for the Cheshire Inn -- a restaurant/bar that most recently served as a 3 a.m. hot spot in the 1990s and early 2000s.

Speaking before the Board of Alderman's Housing, Urban Development & Zoning Committee earlier this month, a representative of LHM asked the city for ten years' tax abatement for the Cheshire Inn property and said the plan was to make the building the new home of Tony's.

"They said they were talking to Tony's, and the impression I got was that it was a pretty serious conversation," recalls Alderman Fred Wessels (13th Ward), chair of the HUDZ committee. Wessels adds that it is his understanding that Anthony's Bar, a power-lunch joint located around the corner from Tony's on Broadway downtown, will also move into the Cheshire Inn.

Vince Bommarito, who owns Tony's, says he hasn't signed any lease at this point. "We're looking to see if the numbers work," Bommarito tells Gut Check. "It's not a done deal."

Under the tax abatement approved by the HUDZ committee and to be voted on by the entire board on Friday, the property tax for the Cheshire Inn would remain at its current level for the next ten years. While Tony's move would be a hit to the downtown dining scene, Wessels and other St. Louis politicos say it's better than having the restaurant move outside the city limits.

Bommarito tells Gut Check that he has looked at moving his restaurant to other locations in recent years, including the former site of Busch's Grove in Ladue. Tony's is routinely ranked as one of Missouri's finest restaurants and the only St. Louis dining spot to earn four stars from the Mobil Travel Guide.

A representative with LHM did not return phone calls from Gut Check.